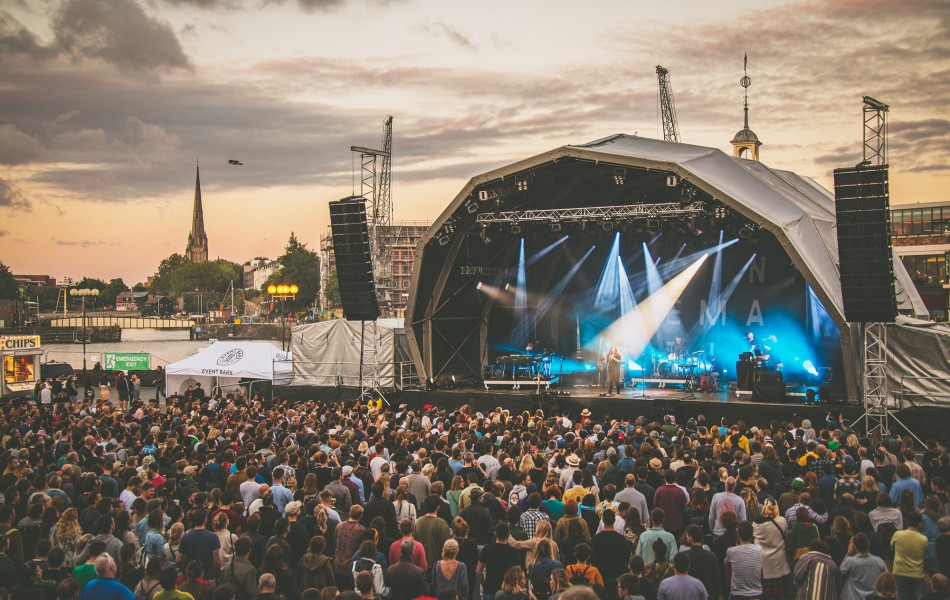 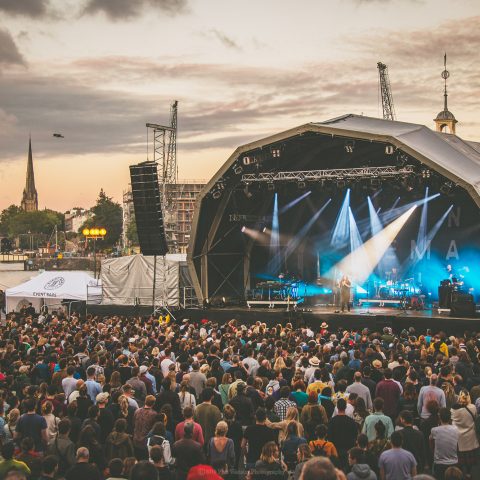 An arena which had become my home for three nights of Bristol Sounds was coming to a sad ending, worsened by my extreme Sunday hangover, I was keeping my fingers crossed for a magical closing to the weekend. Opening the night was Obaro Ejimiwe who goes by the stage name of Ghostpoet, a two-time mercury prize nominee. Pushing the dark qualities of post rock, the subby bass of dub and spoken word, his music has moved on from its original more electronic realm. Whilst I was lost in a soundscape of relentless emotion and obscure wondering sounds, I found it hard to connect with Ghostpoet’s character himself. Leaning into his mic, hidden behind dark sunglasses and very little conversation which is not always necessary but helps to not feel like a fly on the wall of a rehearsal.

I did however feel tranced by his guitarist and drummer who both had individual charms, talents and movement that I became very fond of. I latched onto the intensity of the guitarist’s stare to his band mates and the crowd was inspired by the badass woman with unique flare crashing across her kit.

After a short interval of consuming more hangover curing food and trying to grab a seat in the busy VIP area, The Cinematic Orchestra began the race to the end of the weekend, and champions they were. Lead by original DJ Food member, Patrick Carpenter on turntables to the right of the stage the other members folded in; Luke Flowers (drums), Tom Chant (saxophone), Nick Ramm (piano), Stuart McCallum (guitar) and Phil France (double bass). Immediately I was whisked away to a serene moment in time where the docks became a floating heaven not harbour. However, this was met with the crunch and crackle of a mic somewhere on the drum kit, knocking me out of my magical place then taking some work to get back into. Once the sound issues had been dealt with and the sun began to set across the stage, I found myself lost for the duration.

Accumulating jazz, rock, classical, pop elements and more, the intensity of sound is that of a large orchestra found in the Royal Albert Hall and creating just as much emotion and storytelling as cinematic pieces on your favourite blockbuster. My pinnacle moments were the addition of the moving and technically brilliant vocalists; Tawiah on ‘Wait for Now/Leave The World’ and Heidi Vogel for ‘A Promise’ and a couple of other appearances. The combination of raw human devotion and expression matched with the simpler yet just as forceful arrangements of The Cinematic Orchestra were particularly moving; a perfect reminder that music really can conquer all.