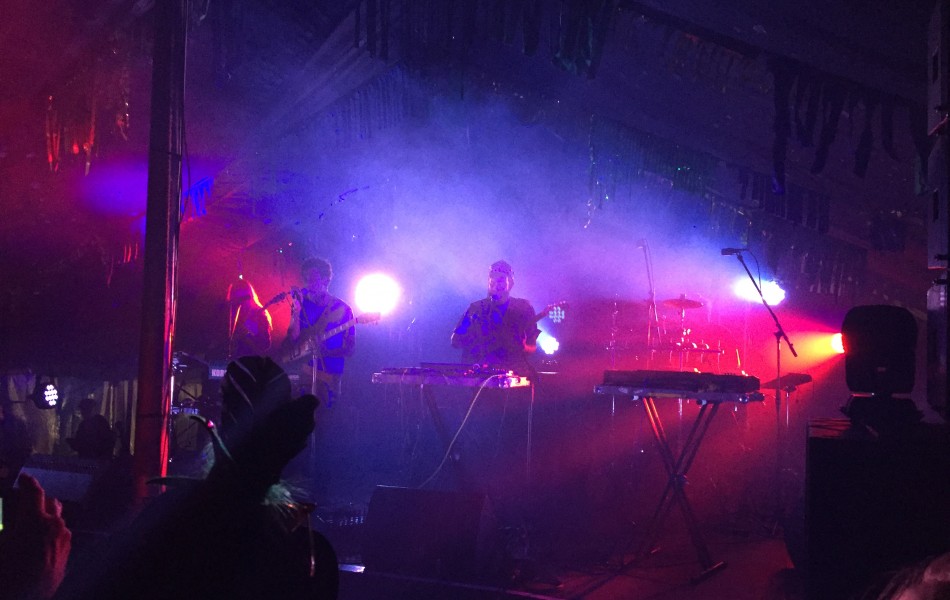 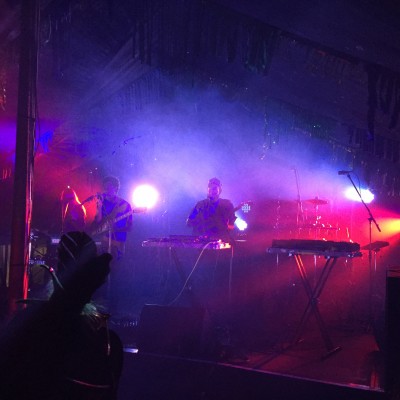 After the grand events of Friday night, we emerge from our tents on Saturday morning deprived of energy. Slowly we enter the festival site for round 2, grubbing down on some morning hog roast before washing it down with Farmfest’s exclusive ‘hangover cure’ smoothie. However it is the serenading harmonies of New Palace Talkies opening up The Sett stage that truly restores us to our natural selves as we sway towards the the tent for more festivities.

We only catch the last couple of songs from the Bristol group but it’s more than enough to convince us of their musical qualities. The heartfelt tones of ‘The Sick’ floating down so beautifully as the outdoor sunshine peels through the tent sheets. Soon after the band go full boogie, exchanging Bombay Bicycle Club-esque guitar rhythmes and soulful vocals for a fine summer finish.

Feeling refreshed we hop straight across to the Big Blue stage to catch Tamu Massif. Eagerly waiting, we briefly catch the glitch pop sequences of Haiku Salut; flowing all kinds of chimes and instruments as they dazzle proudly with their own creations. Slightly late but Tamu Massif gracefully arrives as he immediately launches the lush waves of ‘Red Candy’ then following up with ‘Jejune/Selene’ and ‘Holding Back’ for the perfect summer escapism.

Outside in the modest sunny weather we go over to catch Stevie Parker on the main stage. The singer-songwriter backed by recent acclaim of her debut single “The Cure” shows no signs of stopping with another stupendous display of ambient pop. However it would of been nice to see a little more from the audience with some still nursing their hangovers from the night before.

Back to the Big Blue to catch the wonderful sounds of Ardyn. The pop duo are accompanied by their full band, humbled to be on stage as they perform at the festival for the first time. Transitioning between acoustic and indie, their music evolves with every note, biding time before fully blossoming. New single ‘The Valley’ is pure mastery of luscious sounds, songwriting and vocals working together to produce a spellbinding experience, leaving everyone in awe.

Approaching mid-afternoon we had some time to spare before the next act and so we decide to check out some of the festival activities. Immediately we are swooped by the Brazilian rhythms of Samba drumming by Jamma De Samba which took place right in the centre of the field. Numbers gather in a circle as the large group play their percussion instruments among the lovely weather outside. All fired up we return to the Big Blue to catch an artist which could very much be one of the festival’s anticipated highlights.

That artist is Craig Sutton aka The Flamenco Thief; a man who uses one guitar and a loop pedal to make music that’s equal to a full scale band. We are told good things prior to arriving but seeing Sutton on stage blew all our expectations out of the water. Whether it’s the insane speed of his looping and strums or sheer charisma that got the blood flow pumping, this artist is truly something. It’s late afternoon and Sutton is already performing to a packed tent of hundreds – almost as rammed as DJ Format’s set last night. The audience are loving every minute of it, soaking up the blistering whirlwind of acoustic/sonic soundscapes, carrying the fiery Brazilian Samba fever that took place earlier on.

After the intensity of Sutton’s set, we cool down outside to catch a moment of the glittering electronics of Glasgow’s Errors then off to The Sett to catch the very lively Goan Dogs on stage. Festival vibes are in full swing as the five-piece launch a delicious blend of Americana-fused alt rock, backed by their signature stage lights which never fails to impress. A sense of charm and class every time with catchy hooks and synced harmonies easily winning the crowd over. ‘Flying Business Class’ will always go down as a favourite, proving why these guys are one of the coolest bands around.

One last swing to the Big Blue for the exotic psychedelic waves of Flamingods, who just released their fantastic debut album Majesty. We arrive at the tent waiting for the five-piece to come on. Several instruments being set up slowly delays the set time, then another 10 mins goes by and still no sign of them. We decide to head down to the main stage to catch headliners GoGo Penguin; their beautiful orchestra-esque combination of grand piano, double-bass and drums fuelled by electronic compositions made for a stunning presentation under the cool night sky. We’d be happy to stay here for the duration of the festival but Flamingods were still on our list.

We rush back to the Big Blue and still no band as people are getting restless. Then all of a sudden lights emerge and five individuals make their way on stage. Flamingods don’t spare a moment as they immediately lunge into their continental soundscapes. Playing songs from their debut album, we’re pulled in by shimmering sounds and layered instruments that take us away from the fields of Somerset to the tropical terrains of paradise. Beautifully beguiling, Flamingods were turning disappointed faces into dancing machines, delivering a performance of astonishing quality.

There are not many festivals you could say can bring such a diverse range of music, all on the local fields of Somerset. Festivities for all ages and performances that were top class, Farmfest have outdone themselves once again, showing all why they are one of the best festivals in the world right now.