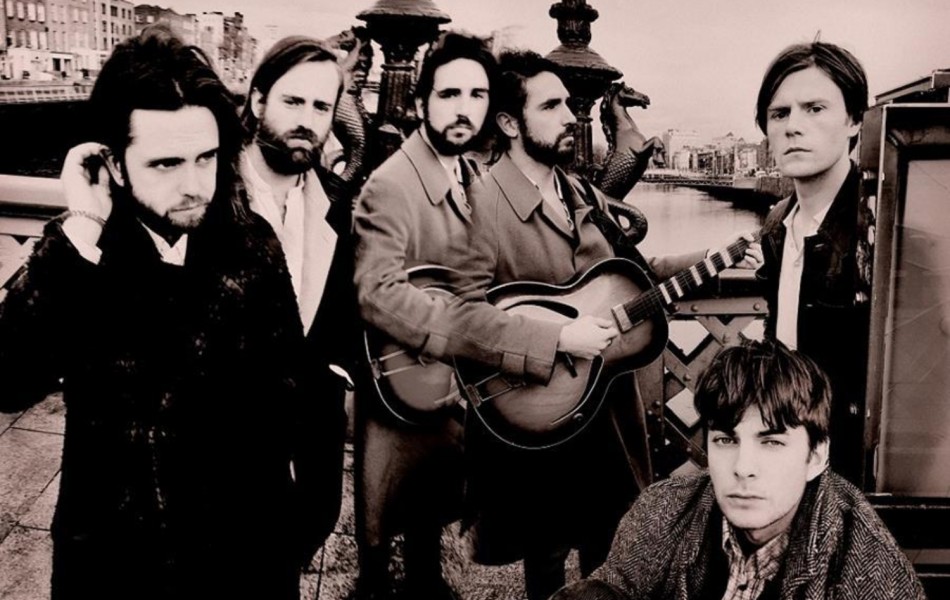 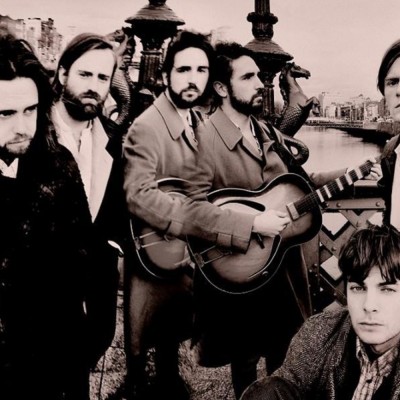 On the eve of their release of hotly anticipated debut album, Dongrel, all male five piece Irish band Fontaines D.C (hailing from Dublin) play a frenetic 50 minute set to a sold out crowd at Thekla. Having played at Rough Trade at 2018’s Dot 2 Dot Festival, the band return to Bristol for the opening date on their small venue six date UK tour.

As the band enter onstage to a dark backdrop of lighting and a jaunty Irish anthem, the crowd are ready to embrace the punk spirit of havoc and carnage on the floor. The lead singer Grian Chatten is the last to enter the fray, looking slightly cautious to what is about to unfold as he chews on his shirt sleeve and bites his nails. He adopts a stance at the mic not to similar to Joy Division’s Ian Curtis.

Opening their set with album track ‘Chequeless Reckless’, things kick in with driving guitars from Carlos O’Donnell & Conor Curley as Grian gives his insight & pitfalls of money against a simple but effective snare drumbeat courtesy of Tom Coll.

There isn’t time to draw breath as the band tear into the pounding single ‘Big’ which sends the crowd into raptures. The crowd sing every word back to Chatten as he explains ‘how his childhood was small but he’s going to be big’. It’s clear to see why Fontaines D.C are worthy of the hype that has surrounded them this year as the band have the audience at their mercy.

While the band tune up for ‘Television Screens’, Chatten doesn’t really engage but instead paces from side to side of the main stage (which he does regularly throughout the set), like a boxer ready and awaiting for the next round of a fight. The band are going for the knockout punch tonight as they continue with latest single ‘Boys In The Better Land’ which is a fast and furious anthem in itself (about being the best version of yourself) which is soon followed by debut single ‘Too Real’ which builds really well from just one guitar, then drums, bass and a low pitched scream from Grian. The crowd react with delight as during the song a crowd-surfer makes his way to the front of the stage to be met by the lead singer singing the lyrics practically face to face! As the song ends, Grian acknowledges those in attendance for the first and only time with a simple ‘cheers’.

The band decide take it down a notch with a track called ‘Roy Tune’ which gives everyone a chance to relax but this is short-lived as the band deliver the riotous ‘Hurricane Laughter’ which gets the crowd moving again. This song sounds like it could easily soundtrack as Formula One race as the drums and bass start and the same guitar riff repeats over the top throughout the whole four and half minutes.

There is no indication that this is the end of the set as the band finish by playing ‘Liberty Belle’ which I would liken lyrically to ‘A Certain Romance’ by Arctic Monkeys about nights out ending in mindless violence. As the band leave the stage to adoration and applause, they hand out handwritten set lists, handshakes and high fives to the hard-core fans, who had survived at the front of the stage.

Just like The Strokes or Arctic Monkeys when they first began, Fontaines D.C have the rock ‘n’ roll charisma and songs that you can both relate and dance to, while increasing their dedicated fanbase across the board. The band will return to play SWX in November so this will be a gig not to be missed.