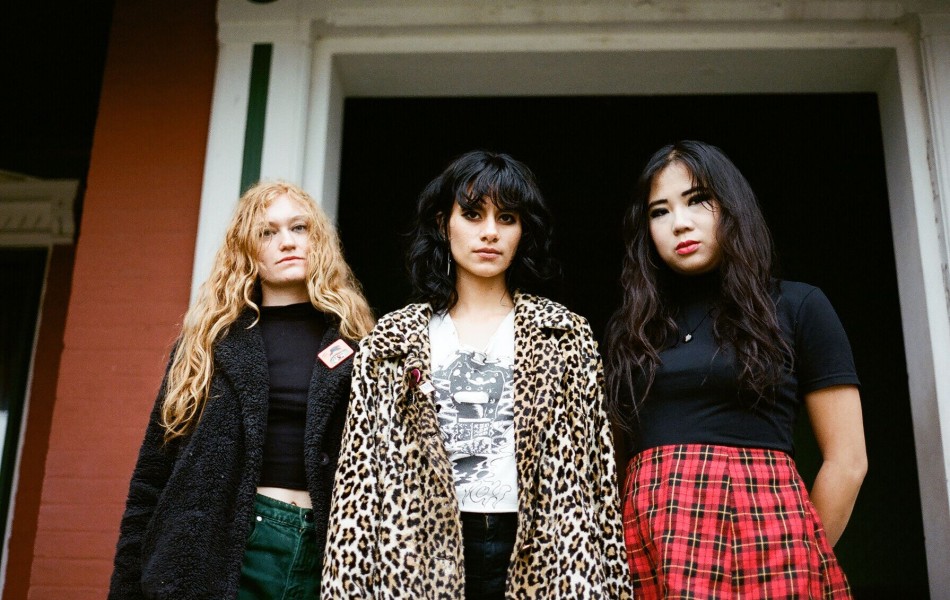 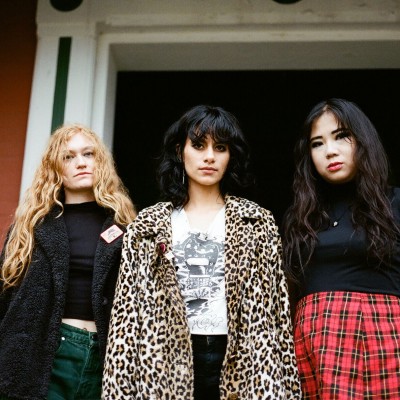 With trippy projections on each wall, a glitzy disco ball reflecting the psychedelic magic, along with a night drenched in psych-pop and reverb soaked songs, you would think the year was 1967 and I was at the notorious UFO Club in London. The only thing missing was the tinged scent of musk incense.

Four piece, Bristol based, experimental frenzy Agarimo were the support for tonight. With songs and sounds that resembled early Pink Floyd demos crossed with shoegaze vibes, I’m pretty certain if Hunter S. Thompson was a noise, it would be encapsulated in Agarimo’s set. Their mysterious demeanour only heightened their presence, hardly introducing any songs which often ended in long winded synth driven jams topped off with a dose of white noise and feedback. If you’re a fan of your heavy psych rock, these guys will take you on the trip of your life.

The lingering mysticism of Agarimo paved the way for tonight’s headliners, L.A. Witch. Consisting of vocalist and guitarist Sade Sanchez, bassist Irita Pai and drummer Ellie English (coolest names ever), the kick ass trio performed a totally bewitching set. Their grunge dipped, reverb punk sounds are knees deep in grit not to mention they oozed charm. Despite the name, none of the girls dabble in witchcraft however their set was spellbindingly magical, leaving me desperate to be the fourth member of their punk rock cult.

Kicking off the night was aptly titled ‘Intro’. A thumping drum and bass intro which was so loud I could feel it in my chest (a key indicator to know whether or not it’s going to be a good night) and a dream-like riff echoing from Sade was a guaranteed winner with the crowd. With undertones of psych rock and an eerily heavy bassline this was an alluring intro which set the mythical tone for the night. Following up with ‘You Love Nothing’, a reverb dream which resembled the mood of The Velvet Underground with flairs of 13th Floor Elevators intertwined to create the right balance of scepticism for me to think this is a song from 1967.

Then came ‘Kill My Baby Tonight’, the opening tune from their debut album which opens with a jangle western style riff, stomping drums and reverb so thick you’d think there was a choir of voices on stage. Hard hitting girl power tunes to get you through your Monday blues. ‘Brian’ and ‘Untitled’ followed, both respectively basked in L.A. Witch’s distinctive garage-chorus guitar sound. This is the kind of music you’d listen to once you’ve been dumped.

Stand out track ‘Baby in Blue Jeans’ then came, a crawling intro which was reminiscent of ‘Ogden’s Nut Gone Flake’ by The Small Faces and ‘Summer Madness’ by Kool and the Gang. This atmospheric assortment along with Sade’s gnarly vocals and slurred guitar topped off with Ellie’s howlingly deep drum beat and Irita’s thundering bass was a recipe for an alluring track from start to finish. A sorrowful ballad, ‘Ain’t Coming Home’ was a whammy wonderland with plenty of reverb thrown into the mix. These girls know how to make some noise.

Then came ‘Good Guys’. Offbeat drums clanging with guitar and bass to coincide with Sade’s sharp vocals to form a two minute foot stepping tune with a tinge of Sonic Youth. ‘Get Lost’ topped the night off. The distinctive bass line still ringing in my ears on the cycle home. The drums slowly picking up tempo towards the end, a roaring amalgamation of each instrument building a psych-punk-feedback fantasy-white noise-esque outro which was otherworldly. Naturally the crowd erupted in applause and were begging for more tunes, persuading Sade, Irita and Ellie to perform one more tune.

L.A. Witch treated us with a final number, Sade proclaiming “we have a new song, it’s called ‘New Song’”. It featured an ace solo with a hefty amount of feedback. This wasn’t enough for the audience, with everyone chanting for another one. Finally finishing off the night (this time for real) was ‘Feel Alright’, a moshpit inducing beat which left everyone in the room head banging and foot stomping. There was a halt midway through, a change of tempo to a more moderate and melancholic beat only to be surged back up again after a tingling guitar solo. These girls certainly know how to tease a crowd.

L.A. Witch are truly enchanting to see perform, they lure you in with coolness and charm all the while delivering a reverb induced paradise.