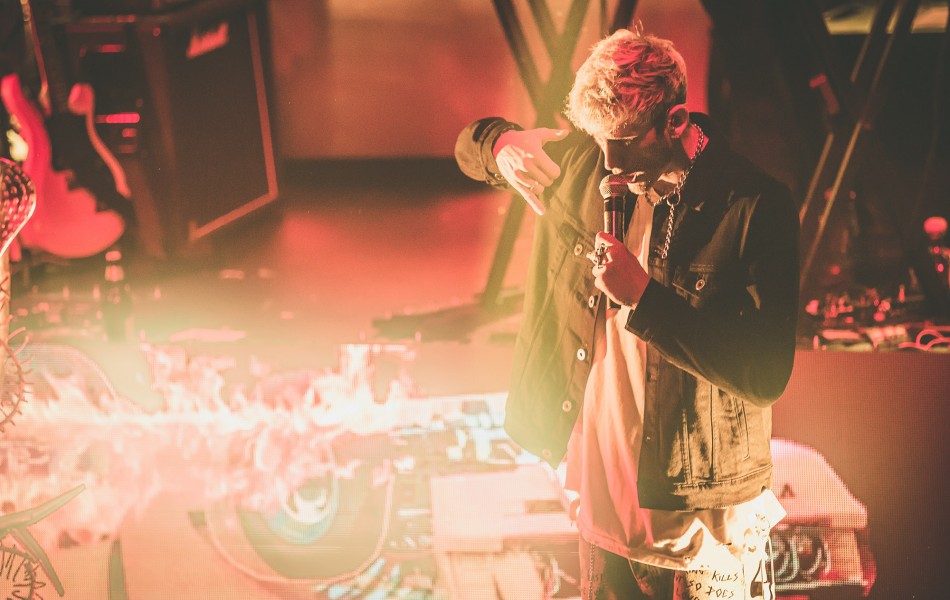 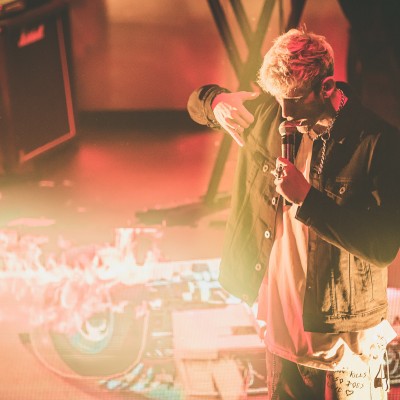 In the midst of his Hotel Diablo world- tour, American rapper Colson Baker, AKA Machine Gun Kelly (MGK) stopped off to play in Bristol’s SWX for a night of bass, beats, and banter.

After waiting in line for an hour, the venue was full to the brim with excited fans religiously chanting “MGK” before support act Bad Girl$ came on stage. Considering they were the only support act, their set was extremely short, which was no surprise considering the poor quality of their music. Hailing from Manchester and described as a fusion of indie trap, the new band failed to entertain the crowd. Their backing music was generic with singer Cooks’ vocals riddled with robotic autotune. Cooks also made his obsession with black women quite clear with several speeches in between songs and the crowd were largely lifeless and unresponsive from start to finish.

MGK’s setup was impressive considering the size of the small stage. He emerged through a doorway at the back of the stage in the middle of an LED screen backdrop. Fans went wild screaming and chanting his name as he opened his set. In the middle of some hard beats and heavy bass, MGK attempted to include elements of rock and softer vocals that left some tracks, such as ‘Habits’, sounding more like a poor You Me At Six tribute band than a rap act. He actually did perform two cover songs during supposed technical difficulties, one by Oasis, and ‘Shout at the Devil’ by Mötley Crüe, yet these songs also appear on the setlists for all his other tour dates. Why he decided to fake such difficulties is a mystery, but despite his hardcore fan base, neither cover was well received and quite frankly sounded terrible.

His vocals also featured the same robotic autotune as Bad Girl$, and his so-called rapping was nothing to shout home about, particularly when he had the audience shout back more than he rapped himself. Having said that, however, his fans seemed more than happy to perform this job and did so with enthusiasm and beaming smiles on their faces. His music also had some impressive beats and intense bass lines that you couldn’t help but bounce along to, and his showmanship was undeniable, but unfortunately, that is where the positivity ends. At one point, MGK actually appeared to spit at his fans and make them catch it with open arms, though it must be said that some thought it was a guitar pick.

One of the worst aspects of MGK was, surprisingly, his lyrics. Considering his background and the amount of hype behind him, it was a shock to hear lyrics that were so drab, lifeless, and repetitive. The high energy atmosphere present at the start of his set was all but gone by the end, as was evident when MGK repeatedly attempted to “open up a pit” towards the end which no one responded to. There was little movement or engagement at all in the last 20 minutes or so, though fans still applauded profusely after it was over.

Having walked into the gig blind, not knowing much about either act other than the genre, it is safe to say the evening was not particularly good. As a fan of rap and hip hop, the entire night was a disappointment, and it appeared that that was the general consensus of the room despite MGK’s high status among his fans. Maybe he was having an off night, or maybe he just doesn’t live up to standards? Check him out and see what you think.