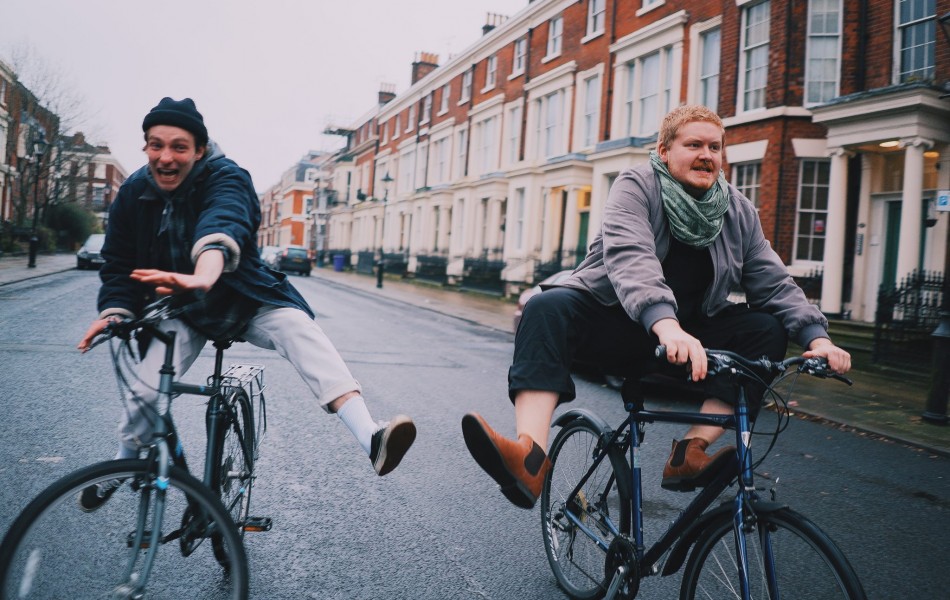 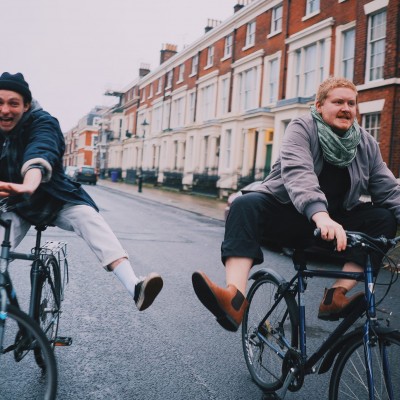 This week I headed to The Crofter’s Rights for an overdue visit and to listen to some sweet bands and drink some sweet cider. I was truly spoilt when I found out that both support bands have been on my radar for quite some time, topped off with the excitement of seeing Her’s again. This was an early Christmas present if ever there was one.

Walking into the back room, I was greeted with the most impressive pedal/station/desk unit I’d ever seen. The Ornsteins, consisting of Joe Groves (formerly of Let’s Kill Janice) are a lo-fi repetitive fuzz one man band outfit. With flourishes of grunge and an ethereal use of a loop station, The Ornsteins create a tingly atmosphere which will stimulate your senses. Jangly riffs, a chorus of vocals which had been reversed and a reverberated feedback finish was an all encompassing sensory experience.

When I bought a ticket for tonight’s gig I didn’t think I’d be paying for a comedy night as well. Comical duo Oro Swimming Hour left me entertained in more ways than one. Performing fun indie folk numbers, Nicholas Stevenson and Oliver Wilde delivered a set filled with feelgood vibe and humourous lyrics. “This song is about someone that broke into my house and all they stole was paracetamol” Nicholas announced in a deadpan manner before the two dived straight into the song, aptly titled ‘Paracetamol’. Oro Swimming Hour are hilariously fantastic and deserve their own sitcom.

Fun loving Liverpool based duo Her’s now grace the stage. The disco ball is twirling, the stage lights illuminating the stage, Stephen Fitzpatrick and Audun Laading begin setting up on stage and remove a gaudy tablecloth to reveal a laptop and a launchpad. The final and most crucial part to setting up is to precariously place a lifesize cardboard cutout of Pierce Brosnan on stage. He is the jewel in the crown, their fifth Beatle (or in this case, third) and he is centrestage.

It’s clear from the get go that Her’s are here to have fun. Opening with the first track from their debut album Dorothy, a thundering bass from Audun which made the ground vibrate contrasted to Stephen’s angelic vocal deliverance and jangly pop riff was a sugary delight and paved the way for the night. Then came ‘Cop Theme’, a prog rock instrumental track which then led up to ‘Marcel’. A dreamy tune which echoes summer days and romance. Even the riff to this number is enough to put a smile on your face. A fun bopping bass and Beach Boys-esque backing vocals, ‘Marcel’ is the equivalent of the word ‘delightful’.

Her’s then unleashed a brand new song, funky bass which was reminiscent of the bass line in ‘Another Brick In The Wall’. There isn’t an inch of that stage that wasn’t being used by Audun leaping around, all the while hitting everything note for note. Catchy lyrics such as ‘I know what you’re all about’ in Stephen’s trademark vocals which can range from David Byrne to Brian Wilson. I am already yearning to hear this song again.

Stephen and Audun’s stage presence is wonderfully charming, it’s like watching two of your close mates fooling around, only you wish Stephen and Audun were actually your close mates. “We’re going to play ‘Cool With You’ if that’s cool with you” announced Stephen in a sarcastic tone, a few chuckles came from the audience. A quick change of backing beats on the sample pad before the dream pop riffs engulfed the room. A relatively slow intro which is the perfect chance to grab someone in the room to slow dance with, before a change of tempo in the last quarter of the song to a more upbeat funky vibe which was borderline impossible not to dance along to. The duo were bobbing up and down in time to the song which only added to this. Playfully romantic lyrics such as “silk skin lovers dance with diamonds in their hands” and “if only there’s no melody, belong to more than fantasy” are beautiful examples of their charming songwriting, all topped off with a lively extended outro of the two fooling about. I’ve never had as much fun as I do when I see Her’s perform live and witnessing ‘Cool With You’ only made me want to be their third member, or at least stand next to Pierce Brosnan on stage.

Back again with a new number – these guys are the gift that keeps on giving. A jazzy tune with a sickening bass (in a good way) and a delicate amount of chorus on top. The lyric “I never thought I’d get upset” still ringing in my ears, totally not lamenting about this gig honest. The chivalrous ‘Speed Racer’ then came next. A disco twist tune which will have you jiving around the stage like Audun, throwing himself around on stage in an energetic and animated manner makes me fear for his life but also part of me wants to join in. I keep my moves slightly more muted for this song however.

“The next song is called blue chorus pedal”, known to everyone else as ‘What Once Was’ or “black and yellow donatello” as Stephen called it. The two of them were making jibs and cutting about on stage and generally having a great time whilst fitting in a song here and there. ‘What Once Was’ is another pure example of tender songwriting, combined with illusory riffs and a decent amount of ricocheting on stage. The audience then broke out into applause, Stephen in the meantime lay down onstage playing his guitar whilst Audun leant over him like an angelic holy figure, delivering an ear shatteringly stunningly marvelous bass solo. It was like looking at a Renaissance painting. This tomfoolery only resulted in a bigger applause to which then the two then played ‘I’ll Try’. Featuring an interlude of Audun speaking French (don’t ask me what it translates to) and a dazzling danceable riff, ‘I’ll Try’ encapsulates Her’s iconic sound of bouncing bass and saintly lyrics.

Whilst leaving the venue I overheard someone say “they’re so goofy”. I’ve never had as much fun as I do when I’m at a Her’s gig. There are rumours that they’ll be hitting the road in March 2018 for some more antics. Everyday is a Her’s day when they’re in town.