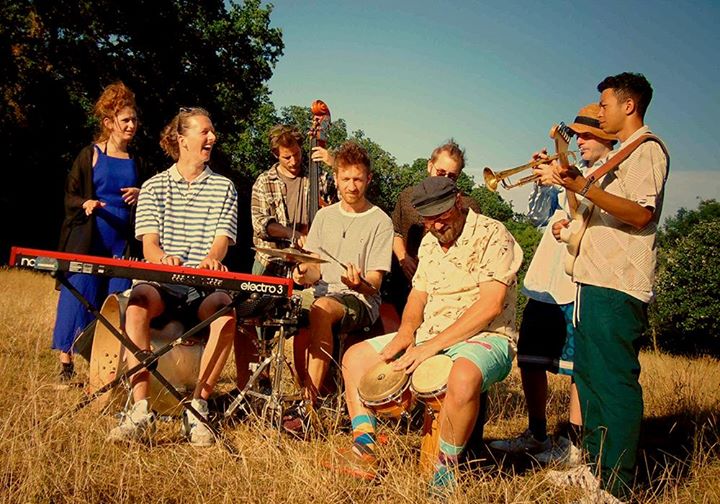 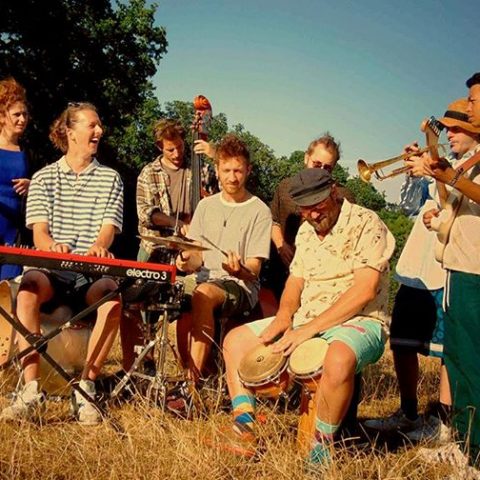 After touring around the UK and delighting audiences across the country with their fusion of jazz, world music, afrobeat and funk (to name a few!), Snazzback were back in their stomping ground to perform a headline – and sold out! – show at The Crofter’s Rights. The eight piece ensemble had recently released their debut album Hedge which is a seven track odyssey of colourful beats and rich horn sections. Their show at Crofters was nothing short of a full frontal boogie. The venue was electric, tunes were provided by Glade Marie on the decks by the bar. The stage was donned with bunting, lanterns and fairy lights which looked aesthetically pleasing, it also gave a domestic vibe, as though I was watching them in their front room.

Support came from the iridescent Cloudshoes, a jovial and vibrant outfit which was reminiscent of the Syd Barrett era in Pink Floyd. They performed a set which was tight and upbeat which set the mood perfectly for Snazzback’s equally tight performance. The stage was packed with bodies, decorations and a pretty hefty amount of percussion instruments. The interstellar intro to ‘D.M.S’ chimed up, filled with shimmers of tribal influences and irregular drum patterns, not to mention China Bowls’s dazzling vocals. The line ‘what you came here from’ reverberating throughout the room, add that to a mystic trumpet solo and you’ve got a heavyweight of a song to kick things off. A majestic outro which then dwindles down before heading straight into ‘Sandal’s Disaster’. A hypnotic tune which featured some manic sax lines, chaotic drum beats and cool guitar riffs. The gig felt as though it was a natural jam, Dave Sanders on sax gesturing in the air for time changes throughout the songs which added an overall organic vibe to the set.

‘Flump’ began with a tribal-esque intro along with some smoke courtesy of the smoke machine. A totally enchanting number with a lead guitar riff which was subtle yet added reams of texture, there were plenty of drum and percussion breakdowns which got us all grooving. Chris Langton on drums then came up to the mic and announced that their next song ‘Park Ark’ is a “freak out take on afrobeat” – boy was he right. It’s also the first song they wrote with Sanders when he first joined the other Snazzbackers. There was a beastly sax solo which was deafening levels of insane; a genre-bending tune which exemplified their influences in various genres.

Solidifying the night and Snazzback’s reign as one of Bristol’s most diverse bands was a stunning performance of ‘Ellsdon in a Hedge Pt 1’. The energy was tangible, almost spiritual. A certified groove the song was embellished with China Bowls’ bewitching vocal runs and a pretty insane bongo breakdown from Myke; the night was sealed with a beefy trumpet solo from Alfie. Naturally we all wanted more and begged for an encore and were teased with a new number which featured a cool guitar riff which had faint elements of prog and a steady and heavy beat. Two rounds of applause were given during the encore tune – I imagine this was the music equivalent of a Paul Hollywood handshake.

Snazzback’s homecoming show was nothing short of magic, it was a fitting send off before China Bowls and keys player Hal Sutherland head off to Australia for a few months. Check out our review of their debut Hedge here.