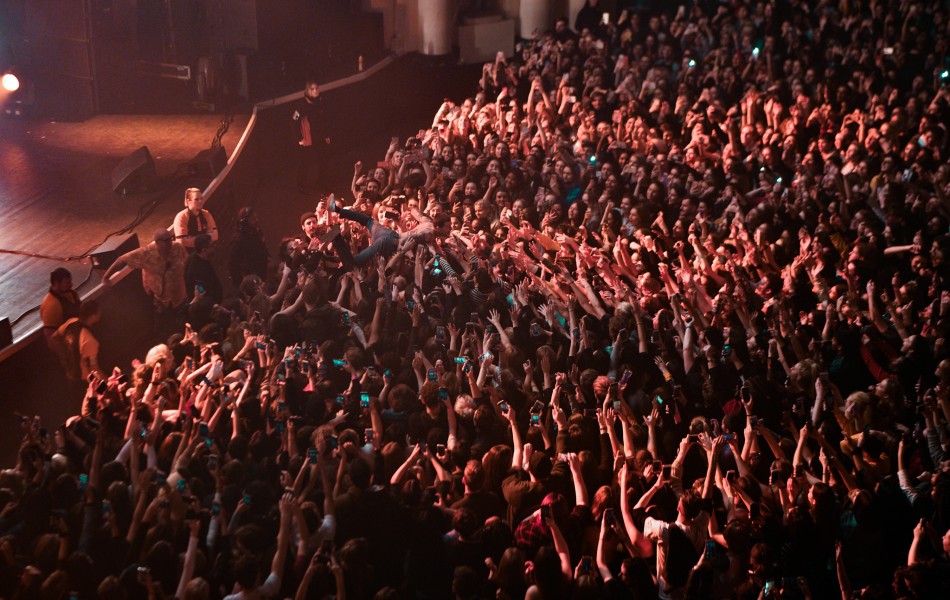 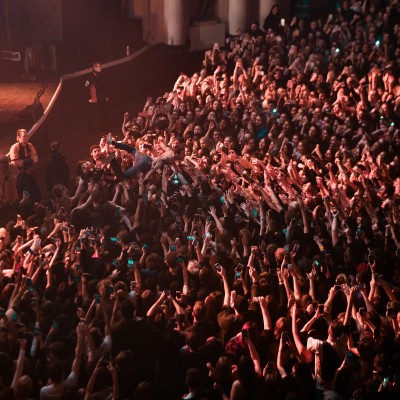 The Neighbourhood blew up in 2013 with their hit ‘Sweater Weather’, which reached number one in the Billboard Alternative Songs after a performance on Jimmy Kimmel Live. Since then, the band has opened for Imagine Dragons and gone on their own headline tour. This year, they promote their new album, Hard To Imagine The Neighbourhood Ever Changing on a European headline tour. We caught them on the first date, at London’s Brixton Academy.

Bringing an electric start to the show, HEALTH warmed up the audience with their carefully crafted “noise rock”. It was clear the band had many fans in the audience, as they cheered and sang along with them. They were truly the perfect start to the night, and I imagine everyone in the venue is looking forward to seeing their own headline tour.

Because of this, it was evident tonight’s show was going to be a fun and energetic one, and The Neighbourhood did not disappoint. The set started with ‘How’, providing the perfect build up to warm up the audience for what was coming. Being from their first album, it was fitting that the band chose it to start the show, from where it all began. Next up was ‘Dust’, a faster paced song from their latest album. The composition of it was incredible, taking the audience on a journey of highs and lows. Songs such as ‘Afraid’, ‘Daddy Issues’, and ‘Scary Love’ we’re clear fan favourites, and everyone in the standing area jumped in unison, the entire venue singing every word. The energy of the crowd was easily matched by the band.

Frontman Jesse Rutherford is a powerhouse. Not only could he easily hype up a crowd, he made sure to try to interact with everyone. This was made evidently clear when he jumped into the crowd and crowd-surfed the entire length of Brixton Academy. While many try and eventually sink into the crowd, Rutherford made it to the back, and proceeded to try to run through the crowd to get back to the stage, effortlessly jumping back on without help. The crowd went crazy, and those in the seats above peered over the edge to be a part of the excitement. Throughout the show, he occasionally swung across stage from the massive chain that hung in the center. Flipping himself upside down, swinging with one arm while holding the mic and singing with the other, nothing seemed to stop him. Even despite this, he continued to sing flawlessly. The band also played ‘Beat Take 1’ for the first time live, continuing to receive the same energy and love from the crowd. The encore consisted of their hits ‘Sweater Weather’ and ‘Stuck With Me’, finishing it all off once again with where it all started and where they are now.