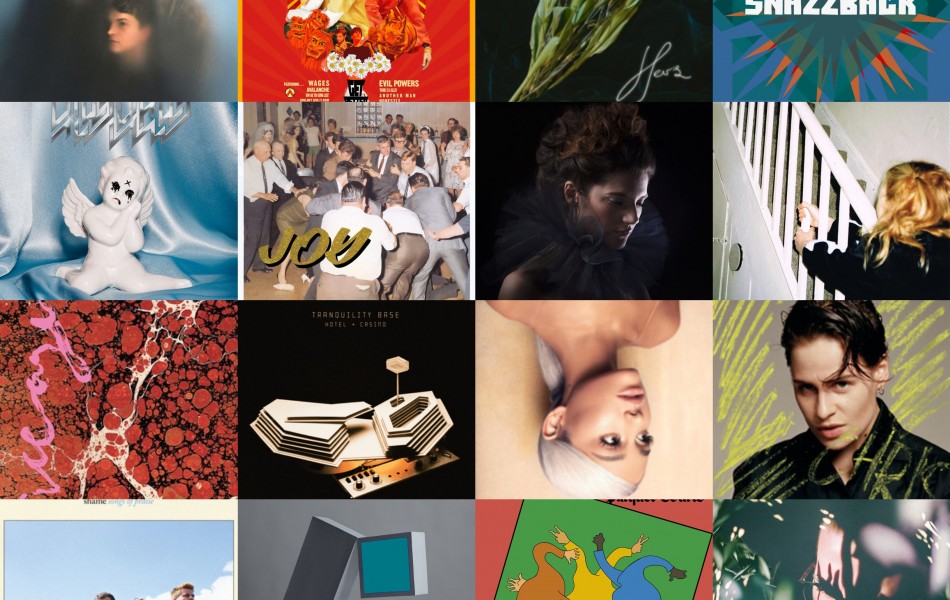 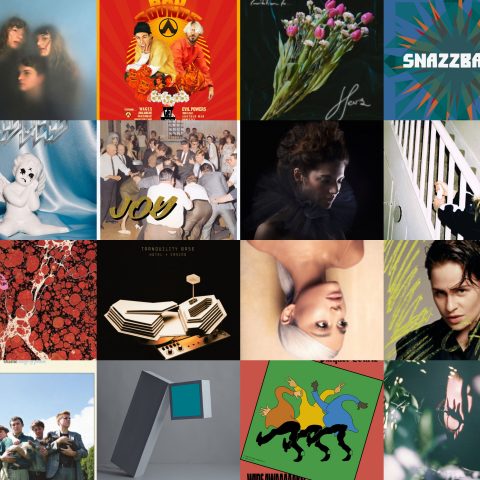 Our next end of year list is, of course, our albums of the year. This year has no doubt delivered some truly remarkable pieces of work that have shaped the scene in more ways than one throughout 2018. Picked by our lovely team here on Tap The Feed, check out our top 20 favourite album of 2018.

Beefy horn sections? Check. Glistening stabs of world-fusion? Check. Luscious vocal lines? Check. Hedge is a mighty seven-track trip which is packed with energetic beats and monstrous riffs. Snazzback have cemented themselves as a fine example of Bristol’s contemporary jazz scene, weaving elements of afro-beat, hip-hop and funk into one mighty brew. ‘Mr. Frimp’ is a stand-out track, exhilarating and slick with a decent dosage of jaggedy sax and irregular drum patterns, taking us on an unexpected trip. A total groove-fest of an album that’ll have you foot tapping and jiving along. Amy Grace

Metal’s most controversial newcomers continue to hold ten middle-fingers up to the purists and delve further into their woozy concoction of black metal, shoegaze and post rock, incorporating clean vocals, Britpop guitar solos and piano. Whilst certainly not to everyone’s taste, the likes of ‘Honeycomb’ and ‘Canary Yellow’ are some of the band’s most ethereal, painfully beautiful songs to this day. Stan Bull

From acting on Nickelodeon, to releasing her newest album Sweetener, Ariana Grande has grown up in the public eye. Revealing fresh love and a new-found self-confidence, the album displays Grande’s astounding vocal ability alongside artists such as Pharrell Williams. Her unique tone and acrobatic skill are backed by flawless pop melodies that stick around for days, pushing them to the top of the charts and the tip of your lips as you’ll be humming them non-stop. Lucy Pearce

17. Skating Polly – The Make It All Show

Skating Polly’s latest record has seen the female-fronted duo develop a more vibrant and polished punk sound. Working with legendary punk artists X’s Exene Cervenka and Beat Happening’s Calvin Johnson has certainly paid off with The Make It All Show showcasing a new and improved Skating Polly that push the genre boundaries to new levels whilst representing women in the industry today. Mustafa Mirreh

One of our country’s most celebrated guitar bands often come under scrutiny from pretentious music nerds simply for being a bit too popular. Unfortunately, this often distracts from the fact that the music Alex Turner and Co. have been making over the last decade is always one step ahead of almost everyone else in modern rock. Tranquility Base Hotel & Casino is no exception, with a Kubrickian sheen applied to a number of dizzying piano ballads, showcasing surreal lyricism with lounge lizard charm. A defiant move from a frequent festival headliner who refuse to be pigeonholed. Cosmic. Stan Bull

Following a string of successful singles and a killer EP, the fun-loving five-piece that is Bad Sounds released their debut Get Better. Featuring favourites such as ‘Avalanche’ and ‘Wages’, alongside the new material, the band have delved deeper into psychedelic and electronic sounds, whilst remaining rooted in their hip-hop aesthetic. Packed with playful lyrics, strong hooks and buoyant beats. It’s a thirteen-track journey that’s one wave short of a concept album – a mature and energising debut from Bath’s finest. Amy Grace

Heaven from Canadian grunge rockers Dilly Dally raised the bar once more but at the same giving a new lease of life to the Toronto four-piece. Three years since their groundbreaking debut album Sore witnessed a turbulent period for the group which almost saw them quit music all together. Thankfully they stuck to get guns and have come back stronger than ever in this emotionally powerful record, drenched in feedback and beyond raw vocals, topped off with some fuzzy guitar riffs and punk-style undertones. Dilly Dally are here to stay and truly mean business. Mustafa Mirreh

An album and artist who has set the tone with beautiful electronic arrangements and vocals that are simply unmatched to what currently exists in the scene today. Debut album Safe from Bristol artist Chaouche is a cohesive statement of unique sonic personality and artistry that springs to earth fully-formed, creating a sound-world that’s undeniably a masterpiece. Mustafa Mirreh

After taking a trip through a technicolour asteroid belt and orbiting a planet drenched in 80’s grooves; the 11-track-jangle-pop odyssey that is Her’s debut album finally landed. Easily one of my most anticipated albums this year, signed, sealed and delivered hurdy-gurdy riffs, dreamy soundscapes and heavenly lyricism. My favourite track has got to be ‘If You Know What’s Right’ – is a calypso-pop dream, coming out of the gates with a poppy riff and their trademark woozy deliverance. ‘Low Beam’ is also an honorable mention, a carousel of reverb to kick things off, followed by some slick chord progressions and a bass line that will make your fillings ache. A monumental debut for the Her’s boys. Amy Grace

Aussie funk outfit Parcels may have released one of the greatest bangers of 2018. An astronomical debut, dripped in colourful riffs, slick grooves and luscious 5-part harmonies. A coherent and ambitious album, from the crooning ‘Withorwithout’ to the funk-pop odyssey that is ‘Tieduprightnow’, Parcels have crafted an infectious beast. Pockets of electronica seep through each track as though tinged with some sort of cosmic energy; a fresh and colossal debut which you’re most definitely be grooving along to. Amy Grace

After making a name for themselves as extremely young, nihilist punks from Copenhagen, Iceage have matured into something of an international treasure, celebrated by the underground punk scene and mainstream rock fans alike. On their fourth album, the energy of their early records remains, but the addition of horns, piano and sax builds on the timeless raucousness of their music. With each passing record, Elias Bender-Ronnenfelt’s grasp of the English language and sense of showmanship improves, resulting in some of his most impressive vocal performances and lyrics to date. Stan Bull

Debut album Shift from Bristol artist Henry Green is not only an impressive record, but also an impressive journey for the artist where his sound has come of age. Moving away from his earlier folk acoustic foundations, what we have is a transformed and fully fledged experimental sound which utilises everything that modern music technology has to offer – shaping the very fabric of Green’s ability as a producer and forming an exciting new path that’s truly noteworthy. Mustafa Mirreh

Spilling with themes of anxiety, loneliness, and confusion, Car Seat Headrest’s Twin Fantasy explores frontman Will Toledo’s infatuation with an unnamed man. Re-recorded with a full band since its original solo release in 2011, the album follows the highs and lows of love through 10 grit-filled songs that cross over and weave throughout, with reappearing verses and melodies that interject sporadically. Matching the energy, tone and passion of Toledo’s previous version, Twin Fantasy is the muddy, honest, riff-ridden soundtrack that we all need right now. Lucy Pearce

Despite making their fifth proper album in seven years, New York’s Parquet Courts are showing no signs of running out of steam. In fact, with legendary producer Dangermouse behind the desk, the band have never sounded more inspired or urgent. On top of hooky punk chords and funky basslines, vocalists Andrew Savage and Austin Brown externalise their most direct, socially-relevant and humorous lyrics to date. You will not find another political American album this year as fun as this one. Stan Bull

Quickly making noise across the Atlantic, New Yorkers Bodega captured many attention this year with their thought-provoking music filled with sharp and witty lyricism that would both challenge and excite you all at the same time. Debut album Endless Scrolls does just that, streamlined and minimal but bursting with life, intelligence, humour and creativity. Mustafa Mirreh

Bold, full of energy and unapologetic; the thriving confrontation of Shame has proven to be one the 2018’s finest highlights. From raucous live shows to their raw and youthful debut album, the band have showcased such work that is fuelled by feeling and done so in their own way. Glistering indie rock that’s fitting no matter the generation. Mustafa Mirreh

Fenne Lily has truly come into her own as a performer and songwriter with debut album On Hold being a prime example of her growth over the past year. Lyrical mastery and beautifully constructed rhythmes come together to form such an honest and emotional body of work that’s so lean, evocative and memorable throughout the entire process. At such a younger age and so much industry praise already, the future certainly looks bright for Fenne. Mustafa Mirreh

3. Christine and the Queens – Chris

Evolving, disruptive and power; under her new moniker as Chris, the French singer by far released this year’s best pop album – one that comes across more masculine, confident and true, taking us through her electrifying collection of beautiful and defiant pop songs. Mustafa Mirreh

Moving fluently between psych influenced intros and gritty guitar solos, Our Girl’s debut album Stranger Today surpasses all expectations. The corkscrew melodies pull you gently into the fuzzy world of Soph Nathan’s husky vocals, her soothing tones cradling before kicking you into one of their many huge sing-along-chorus’. The album is an impressive baby of their limited recording time, showcasing the bands pure talent through non-stop head-bobbers. Lucy Pearce

1. IDLES – Joy As An Act Of Resistance

Shouting loud about loss, sobriety, sickness and society, Bristol boys IDLES don’t hold back. Their second album – Joy As An Act Of Resistance – provides mosh pit lovers with heavy, fuzzy, riff-fuelled music that’s sincere and hard-hitting. Grizzly vocalist Joe Talbot lays lyrics that demand the ear and grip the mind, allowing insight into the brutal experiences of his life – from alcohol abuse to his mother’s death. An album for those in times of need, or for those who simply want some timeless post punk. Lucy Pearce