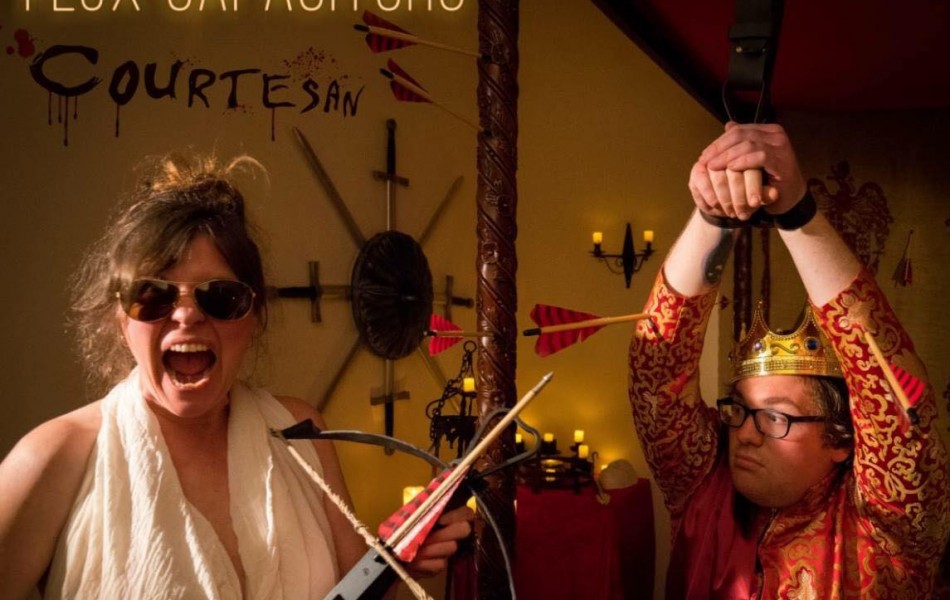 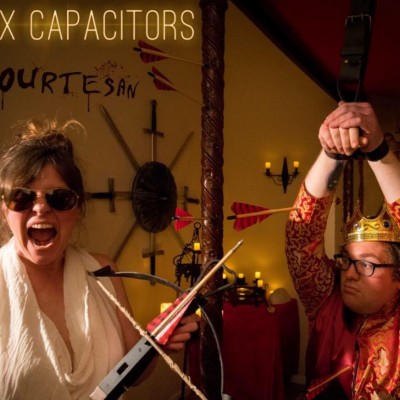 Of course it has to start with a snippet of Doc Brown, what more, even what less, would you expect from the fantastically furious The Flux Capacitors.

‘Melt’ does what it says on the tin via a tsunami of fucked up Link Wray riffs, blitzkrieg drums and Michael McNeil’s gurgling with razor blades vocals. If ‘Melt’ grabs you by the balls then ‘Swimming’ starts with gently cradling them before jangling your danglies as Hazel tells us of ‘never swallowing this much piss without getting paid for it.’ In lesser hands, ‘Swimming’ would be a slightly insipid pastiche spawned out by the likes of Lana Del Ray. Here it delights in its prettiness while having us all indulge in its perfectly filthy undertones.

Whoever ‘Paul’ is should be flattered to have a such ‘one, two, three’ punk-punch of a song named after him. Hazel steps back and co-lead vocalist “The Commander” steps forward and rides Paul into the sunset of Damned riffs and early Descendents like fun. ‘Paul’ does not break any models but, it’s a damn good pogo while spilling your pint of snakebite over everyone.

With a typical sense of the perverted ‘Chaos’ waltzes in on a the back of a languorous unicorn. All shimmers and delicate charms. It dances around, with nod to alt-female heroes The Breeders and Belly. ‘Chaos’ is all sunbeams breaking through the grey. Like every other Capacitors song, it never outstayed its welcome and before it steps into indulgence it’s gone and we have moved on with ‘Buckfast at Trinity’s’. Now the lazer guns are set to stun. You will be slamming into your best mate, then giving him a hug as the song drops its irresistibly, Cramps-ian sludge all over you. We are now starting to reach warp drive, leaving us to the closet thing the album has to a guitar solo.

‘Deep Diving’ is dipped in hushed vocals, delicate acoustic and lone strings. It’s sense of restrain allows you to draw breath and relax. One to lie on your back and watch the clouds on a summer’s day through the dappled leaves of an old oak tree. With a title like ‘My hair is thinning at the front’ it was never gonna repeat ‘Deep Diving’s’ beauty, rather it is an understandable pissed off rant about the hideous fucked-up ness of female pattern baldness. It’s bile leaden vitriol would make Mark E Smith crack a wonky smile. And yet you’ll still wanna dance in a gloriously tragic manner to it all.

‘Telephone Triage assessment’ needs to be played at every 111 induction (and this is from over 12 months of personal hellish experience). It lacks the bite of ‘My hair…’ but still grabs you in the cortex and groin. We are now sprinting to the end and the Capacitors are not sitting on their laurels. Opening line; ‘I’m too old to suck Satan’s cock’ sets out Satan’s cow-punk manifesto and is built for a Natch driven hoe down. Just careful getting off the floor with them bad knees.

As surely as The Flux Capacitors opened with Doc Brown, the swan song here is ‘Oblivion’. It washes you over like a smoke ring blown by Nic Cage in Wild at Heart. ‘Oblivion’ keeps taking you to the edge of peaking, then finishes you off in a swirl of reverb/echo and massed vocals.

If you want an easy ride, look elsewhere. If you want to expect the unexpected wrapped then dive head first into Courtesan. You won’t be disappointed.