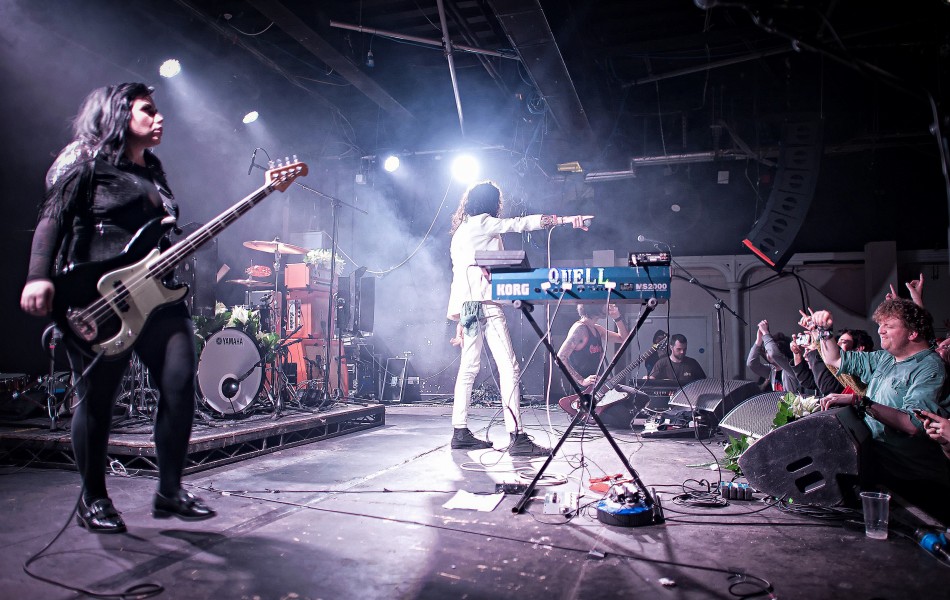 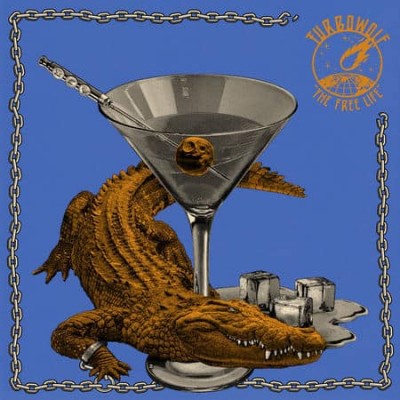 Let’s get straight to the point, this is Turbowolf. You are not here for a spew of Radio Beige mush. Let me repeat, this is T-u-r-b-o-w-o-l-f and you’re in for a loud, noisy and crazy good time. And that is exactly what you are gonna get – The Free Life the new album is all you want it to be.

‘No No No’, is a fuzzed up, interstellar riff beast that kick starts everything, like Usain Bolt on nitrous. It slaps you with its hairy danglies while blasting lasers at you from the outer rings of Saturn.

Turbowolf deal in many things and one of them is hooks so huge they impale you all the way through your puny core. You come out the other side a rampant monster fed on Sabbath, psyche and natch. ‘Capital X’ drips in these hooks big enough to land a gnwarl. Then somehow on ‘Cheap Magic’ the band even manage to force you into your glitter ball shoes and get you dancing; these shoes are then flung off with the slam pit of ‘Very Bad’.

Things to take a wee step down to just below frantically frenetic with the swirling dervish, hand clap lead ‘Halfsecret’. As ‘Domino’ pile drives into you. It features Royal Blood’s Mike Kerr, and oh, how you wish the last Royal Blood album had a fraction of the track’s pummelling appeal. There are guest dotted about in the album (notably Joe Talbot from fellow Bristol band Idles.) They are welcomed, but this ain’t no schmooze fest, The Free Life stands on it’s own hobnailed size 12 feet.

As infectious as an ebola mouthwash, ‘The Last Three Clues’ launches a full blown riff assault at you before staging a takeover that will have you drooling and lurching like a zombie on Xanax. Without lifting the spell ‘Up & Atom’ gets all sinister and bassy, putting some crotch in the grind.

Now we are now riding the album’s triptych closers. Leading the charge, all snotty, bratty and covered in phlegm before more and more of those fuzzbomb riffs is ‘ Blackhole’. It’s covered in chants and guitar lines so dirty Josh Homme must be thinking of suing. Towering and monolithic, the penultimate and title track comes into view, stomping so hard it is creating black holes before setting everything to smash. Then from somewhere in the chaos, Turbowolf pull out the album’s strongest melody before taking us all back to a night on the absinthe with Ozzy, Iommi and other stoner luminaries such as Monster Magnet and The Melvins.

And to the end my friends, with the most aptly titled ‘Concluder’. It does what it says on the tin and draws it all down to a strummed close, like stumbling into the new dawn after a night in the Titty Twister.

Now I’ve told you all about Turbowolf’s new opus The Free Life; now leave me alone, I’m taking it away. To play it by myself, with myself, in a darkened place, with liquor and substances. I suggest you do the same.

The Free Life is now out. Check out our live photos of Turbowolf at Trinity Centre launching the album in all its glory! Photos by Si Morgan.