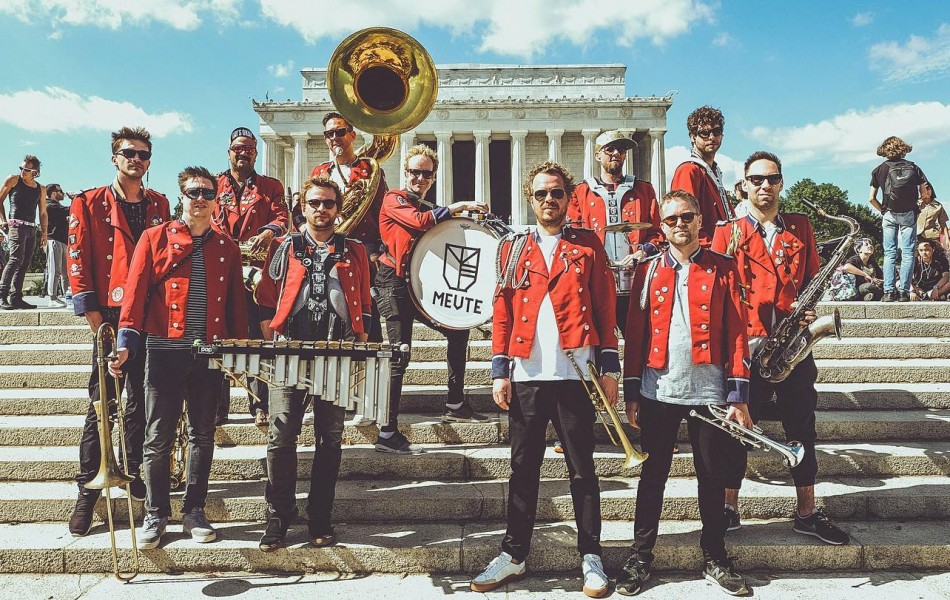 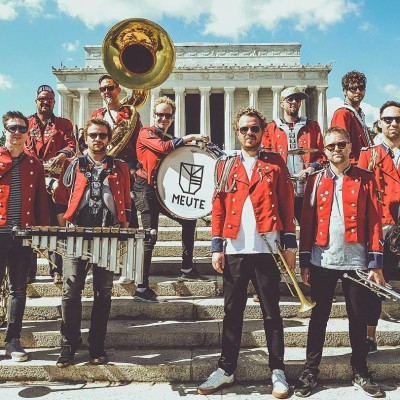 The electronic music community has a lot to thank Germany for: it’s the spiritual home of techno, and birthplace to a host of its sub-genres. It’s here you can find a thriving dance community that is envied by ravers from all over the world. But have you ever thought about what it might sound like to put the analogue and digital instruments to one side, and take the likes of Deadmau5 and Flume right back to music’s acoustic origins?

Meet Meute. The 11-piece techno marching band that have been travelling the world, street performing re-worked covers, storming social media and riding the viral digital wave of success. Now they are armed with original music and are proving they deserve much more than 5 minutes of fame. Ahead of their highly anticipated UK tour, we spoke with band leader Thomas Burhorn about new album ‘PULS’ and what fans will be sinking their teeth into at live shows.

Hamburg housed, Meute began their journey “as an experiment on the streets” playing to large gatherings of passers-by that could not help but stop and listen. After starting as a fun exercise, they were quickly propelled to the global stage, “After our first video went viral on the web, we got more and more requests from festivals all around the world”. It was playing said festivals that really allowed the band to move, from busking, to touring all corners of the world.

Being a band that are so adaptable between genres, it is no surprise that they are able to play an array of stages; from opera houses, to festivals and clubs, enabling them to perfect their craft in a plethora of settings. “Since we are very good at improvising and adapting to different stages spontaneously, it is rather fun to master the challenge in all kinds of different surroundings.” Proving Meute are rising masters of live performance. When we asked what fans should expect for the upcoming UK tour Thomas simply stated that it’s “hard to describe. The best thing to do is come and check it out, there is definitely a lot of energy”.

Touring with such a large party (11 members) you can expect all sorts of wild stories, but one that sticks out to the band, is playing in Boston USA and causing the fire alarm to go off and having to evacuate the venue. They continued to play “in a nearby parking lot playing the session until the police stopped us”, this moment was fortunately captured on video and can be seen on YouTube. Will their UK tour be this hot? The tour is set to showcase recently released third album, ‘PULS‘; featuring more of the re-worked tracks that fans have become accustomed to, yet now with a much higher sense of precision from their increasing experience. One issue the band are still finding hard “is to reproduce the exactness of the arrangements on live instruments”, and when you consider the sheer amount of layers and intricacies that you might find in a Laurent Garnier track, you can begin to understand the challenges of converting this to a live band arrangement. “We learned a lot about this type of music in the first few years, after almost five years we are still finding things to discover”, with our new record, the band has been able to focus more on the “smaller details” more than ever before.

What separates this newest album from previous releases, is that for the first time ever it includes Meute original tracks. Drawing on influences from “many of the artists that we already cover, like Stephan Bodzin, Jon Hopkins, Moderat and more”, this will be the band’s first opportunity to have full creative reign. With this record they have stayed true to what they are good at, playing with arrangements that began as “electronic pre-productions that were produced like techno”, keeping that Meute vibe very alive.

Meute are marching their way into the electronica scene and we reckon they’re here to stay. Their much anticipated UK tour kicks off next month, here in Bristol you can catch them at Motion, Tickets still available.