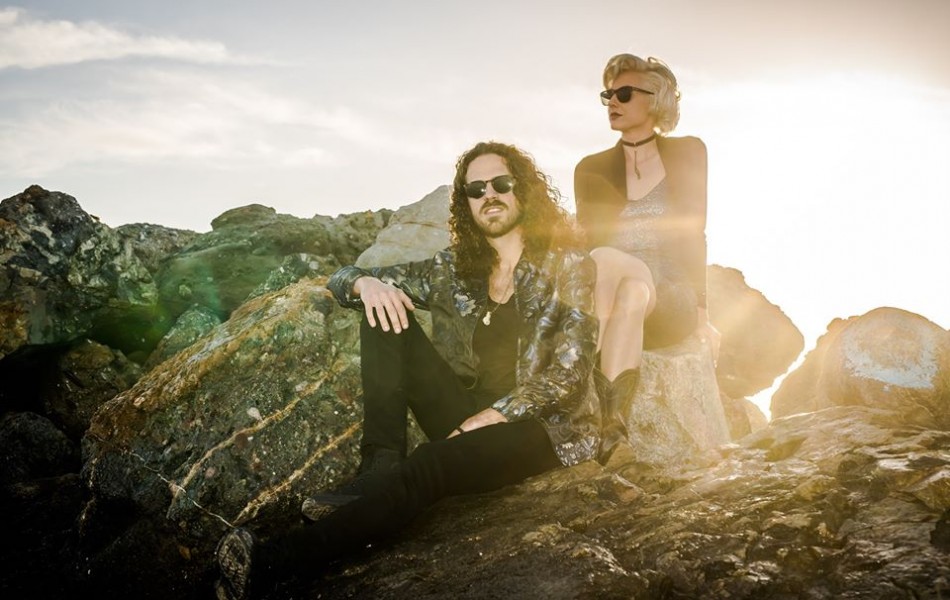 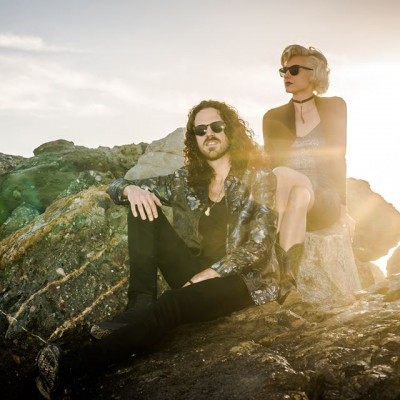 Hailing from sunny Venice Beach California, Movie Club are the instrumental psych band that have the universe smiling upon them. We caught up with sole members, Vince and Jessamyn to talk about life across the pond, their recent release and future plans.

Can you tell us a bit about when Movie Club started making music?

J: We started making music in the fall of 2018 and had known each other for a while. We’d been in different bands and both respected each other musically, then one afternoon we jammed, and it went really. A friend of ours (Rami Jaffee) who plays with the Foo Fighters was having this big studio party. We were like, “let’s put some songs together” with the few instrumental tracks we had. It went really well. So we thought we would just run with it because it felt really good.

You recently released your debut EP Man O’ War, can you tell me about its creation?

J: Yes, the Man O’ War story is very much that, it was the album for us that was the hardest to assemble. This meant that it was the most rewarding of course. Basically, each step of the way we encountered problems, but ended up resolving them with something better than expected every time.

V: Last year we went out to Joshua Tree and recorded 10 demos of songs that we wanted to record. Every time we have made a record we have recorded it all in one day, so we went to a studio in LA called King Size Sound Labs, and had 7-8 hours to record everything in terms of studio costs and stuff. We had practised the songs for over a year and had been playing them live, so doing the recording all in one day isn’t anything new to us. We always have a bass player on our record as well to fill out the sound a bit. That was just a lot slower a process than our last few records. It took months and months and now it’s finally come to fruition, it feels very good that we have it out there finally.

You recorded a 4 track EP in a day, that’s impressive! Has the fan response for the record matched the response of your live shows?

V: We had played one of our songs ‘Moonbow’ for a long time and it was just one of those songs that came to us naturally. Once, we played it live someone came up to us and asked “is this song recorded?” That sucked because we hadn’t had it recorded yet and had meaning to put it out for a long time. Ultimately, the songs do sound different when it’s just two of us playing compared to when we record and have a little more stuff on there. We’re not going to put like 16 synth tracks on it. We believe in keeping it simple.

You’ve had collaborations with Producer Matt Wignall and session bassist to the stars, Tim Lefebvre who played on David Bowie’s Blackstar; how did these come about?

J: Well Matt Wignall he came into my world because I found his band WarGirl and they were awesome. We had a meeting with him where we were like “hey can we do something with you?” and he was down for the cause. It was a really barebones operation, but he really nailed the sound that we were looking for.

J: It just so happened that we fell in the same group as this bass player who goes by the name of Jesus. One day we were hanging out and told him about the upcoming recording. He was like “yeah, you guys need a bass player” and we were like “uh we couldn’t afford you”. Jesus was crazy busy, but Vince had been friendly with Tim Lefebvre for a while and a fan of all his projects, somehow miraculously Tim was around and available to do the album. It was like a straight gift from the universe.

V: The thing is a lot of people can go hire the best person to play the parts and do the recording, we want people that we trust and we tell these people that we love them because they’re valuable to us as friends. That’s been the best part, we’ve only been working with friends.

J: We basically formed under the direct influence of Khruangbin, their first album is called The Universe Smiles Upon You and that’s how we have felt.

An EP from the universe, we like that! What about some of your other musical influences?

V: Being an instrumental band we feel that we don’t have any rules as to letting the influences in, overall, we grew up on 90’s grunge music and hip hop so that is always gonna be influencing us. With this album specifically, we have been listening to more of the California psych and garage bands: Thee Oh Sees and Ty Segall. We got to go and see both of them play live and for me, it was a wow moment. The energy they performed with; I honestly didn’t know shows were still happening like this. It put a fire on us, and we wanted to make a more in your face straight rock and roll record.

You live in California, one of the most vibrant and creative places in the world. How would you say it influences you as a band?

J: I grew up in Boston and Vince is from Pittsburgh, where people kind of scoff when you tell them that you’re anything creative. Here, when you tell people what you do, they’re interested.

V: In quarantine at home in Venice Beach, you still feel the influence and the vibe of the place. There is a specific history that is really ingrained in the culture here, Jim Morrison of the Doors, started here. Even though there is not as much music here as there used to be, I specifically still feel an influence of the ocean and the people here. The history rubs off on you and I can honestly feel it in our music.

You can definitely feel that in your recently released single, ‘Bones’. Besides the new EP, are there any other exciting Movie Club endeavours in the future?

V: So, for our plans in the future we are working on our full-length album now.

J: We are just recording demos at the minute we have about 8 down and 6 more on the way.

Great! We can’t wait to hear it, good luck with it all and thanks for chatting to us from across the pond! If you want to keep up to date with Movie Club follow them on socials for future release dates. Can’t wait? Us either! Man O’ War is out now.