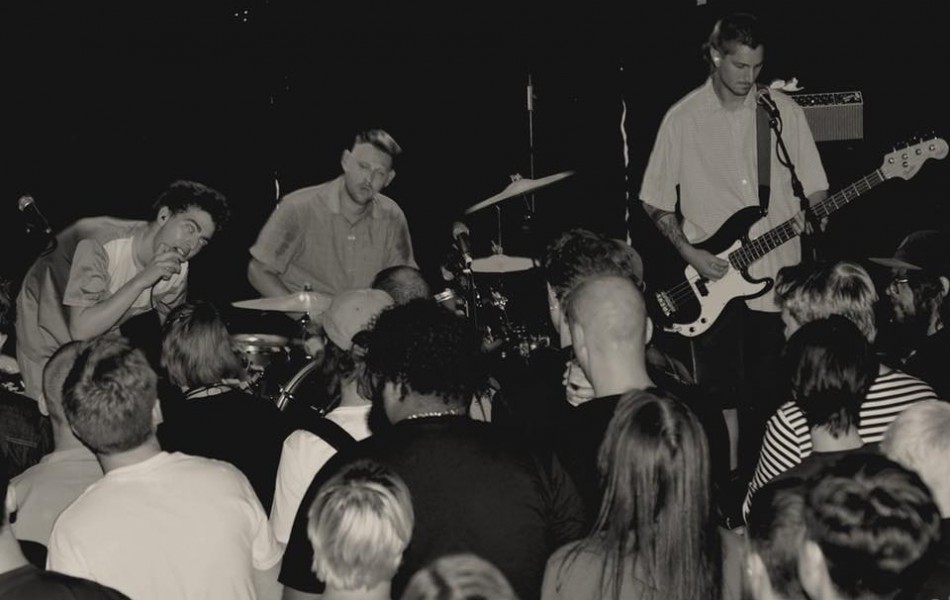 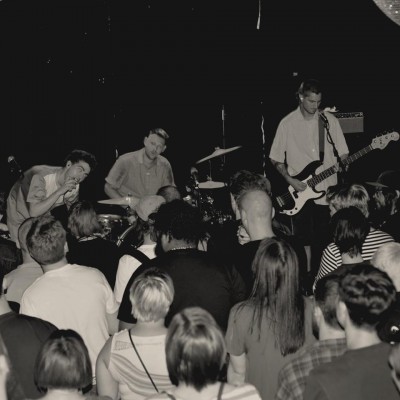 Bristol noise trio, SANS have been melting faces clean off with their potent attack of unforgiving hardcore. With a new EP imminent, they’ve gained a reputation for their wild live sets over the UK. We were lucky enough to grab a chat with them to discuss, inspirations, movies, and Robbie Williams bare chest.

Everyone’s lives have been altered and disrupted right now. How are you finding ways to keep SANS creatively potent and invigorated, or is this a much-needed break from each other?

Paddy: It was a much-needed break. We were all fucking sick to death of each other.

The cancelling of gigs due to the pandemic has hit the music community hard financially. Aside from buying music and merch, are there any other ways fans can be supporting artists?

P: We didn’t make any money from this anyway, so it’s not had much of an impact on us in that sense. It is genuinely devastating to see the effect that it will inevitably have on musicians and independent venues though. I think in regards to your question, we’re lucky we live in an age of social media where we can still feel connected with artists online, like when Robbie Williams did a bare-chested rendition of ‘Rock DJ’. What more could you possibly want?

Harry Furniss from Iceman Furniss lends his trumpet skills in your latest single ‘Aztec Drips’. Is this a hint at further expansion of your palette of sounds for the new EP?

P: Harry Furniss is a total hero who put us on for one of our first shows, so he was great to have on board for this track! With ‘Aztec Drips’ we wanted to make something with that particular beat because it would’ve been a little ‘out of character’ for us, which seemed interesting. Someone on YouTube called it “abrasive samba”, which I thought was great. In terms of expanding the sound, we’ve always had a bit of history bringing in other instruments like synths and drum machines, so we’re totally open to it and keen to explore it more. There’s actually some Glockenspiel on the next track we’re putting out. Recently I think there’s been some influence from local acts also, like Scalping and Giant Swan. We’ve been trying to make some stuff that you might just be able to dance to if you’re a bit of a wrongun’.

There is a disquieting mix of fury and acerbic humour in your songs, which is sensed regardless of whether you can hear each line spoken with clarity. In such tumultuous times, what inspires you to reach into the dark and find farce?

T: The most poignant horror is always shrouded in humour, as the two are often the same thing. So our stuff is more an outlet for that kind of filtered outlook on life when life was a bit more digestible at least. But the world doesn’t really need more of that kinda high-level stress right now. So it’s just nice music that I personally want to be creating and consuming right now. Balance shit out a bit.

We caught you at Simple Things 2018. One detail of your performance stuck, it was a theatrical moment where a wave of your hand suddenly evoked a strange rictus grin. What was behind that?

T: You should really come see us again. Our songs are a lot better now. I learned quite early on that I can use my smile to offend and disturb, far better than I can to please and disarm, so I utilise that in performances to enhance the dark humour of it all. I also tend to smile when I fuck up a guitar part, so it could have been that.

Who are the artists currently getting you through isolation?

T: Bob Dylan, almost exclusively for the last week. I have also been learning some old, trad, jazz tunes.

How’s Thom’s side-project, Troubled Breathing coming along? Any other projects in the pipeline?

T: My pre-COVID-19 kraut-pop-emo project, with the untimely name Troubled Breathing, has been getting a lot of my attention. SANS has very much an immersive, creative process that requires us to all be in the same room playing unnecessarily loud, repeatedly, until it somehow works. Without having that creative outlet as an option, it’s forced me to use this time to channel what I can only describe as my inner, wet boy. Songs instead of sound, which has also lead to some very successful collaborations with new and old friends. I feel like I’ve created some rather beautiful music recently and can’t wait to share it with the world. Also, Harry’s other band Modern Rituals just released their second album, This Is The History and it’s fucking class, go check it out.

Lastly, If SANS were a film or 3, which would it be?

Taxi Driver, Bully and Eraserhead, all played simultaneously, onto the same projector.

Thanks for chatting to us and we hope to catch you again live soon.