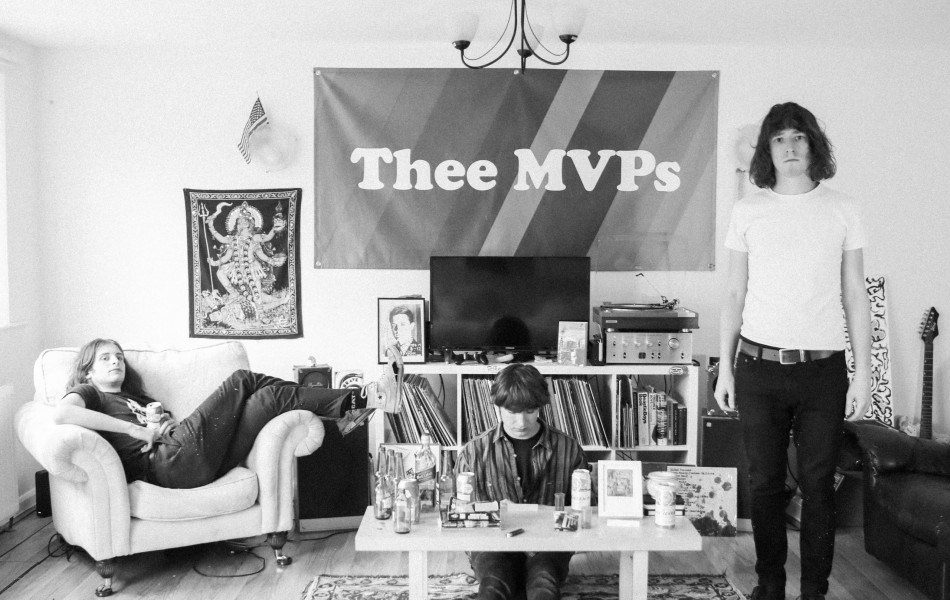 “A man either lives life as it happens to him [and] meets it head-on…or he turns his back on it and starts to wither away.” Speaking to Captain Pike during a time of crisis in the original Star Trek pilot episode ‘The Cage’, the ship doctors’ words of advice addresses that sometimes life in this solar system ain’t all that easy, and if we’re to succeed in boldly going where no one has gone before, tackling our problems head-on is frankly the only option we have if we’re to avoid untimely defeat. For Thee MVPs, that same spirit of courage was mustered to help make their debut album ‘Science Fiction’.

Taking over three years to finish, Science Fiction’s successful release is due in part to Thee MVPs’ frontman Charlie Wyatt, who took things into his own hands after the industry process that’s meant to help bands succeed failed to provide support. Concluding that a self-release was the most fitting way to move forward, Wyatt began planning what would become a label whose purpose would be to give back to the community and whose ethos would borrow from the stalwarts like Castle Face, In The Red and Flightless. After months of hard work and dedication, Eeasy Records was born and so too was a platform for ‘Science Fiction’ to be distributed and heard.

Consisting of 10 tracks that play like a Captain’s log entry chronicling Thee MVPs’ nine-year-long history, the album captures the band in the spirit of who they are today: adroit in musicianship and revelling in a rip-roaring sense of rabid heaviness. Fuzzed out classics like Funeral are included, re-recorded in a high-fidelity fashion so as to fit in with the new material, such as the mellow haze of ‘HAL’ and the incendiary ‘Super Contactable’. Wyatt’s songwriting also shows an extra layer of maturity too, as, by using the metaphor of Sci-Fi, the album, in Charlie’s words, deals with, “the modern millennial difficulties all of us face as we move away from our youth”.

On the phone, Charlie seems to strike an existential tone when it comes to being a musician now in his thirties. However, the age of the frontman shows how Thee MVPs have become the elders of the underground music circuit, acting as figureheads for the DIY spirit that the band so often displays. “Live long and prosper” screams Wyatt during a particularly chaotic moment on album single ‘Ship Episode/Planet Episode’. The phrase feels entirely apt to be barked out of the garage veteran’s mouth, as not only is it words that Thee MVPs have lived by for so long but words that the band hope will inspire others who attempt to walk in their footsteps and go on to conquer adversities in the same independent fashion.

The release of Science Fiction comes at a time when Thee MVPs are approaching their ninth year together as a band. Releasing your debut album this deep into your career can’t help but seem like a significant moment, so how important is the release of Science Fiction to you personally, and what do you think the album represents in terms of everything you’ve been through together as a band?

Charlie Wyatt: I turned 30 a couple of days ago and I suppose that’s when a lot of people might have some sort of personality crisis when it comes to being a musician. But I love music and I love writing it, so I want the new album to be successful and for it to be in people’s hands and enjoyed. It can’t be ignored that there have been line-up changes over the years – that’s just the nature of doing groups – but the most important thing is that the album accurately represents who Thee MVPs are today, both in sound and in musicianship.

Thematically, the album explores everyday life through the means of a Science Fiction narrative. I think this is the first time I’ve heard Thee MVPs’ music sound so focused and cohesive, so what inspired this new conceptual approach to the songwriting?

CW: I think for the longest time I just found the whole album ‘thing’ pretty daunting, but I think naming the record Science Fiction so early on in the writing process helped me because it gave myself a narrative to work around. In a weird way, having a concept and an idea behind the whole thing made the process of writing an album much more manageable.

Do you think that there is some sort of comparison that can be made between you using Science Fiction as a way to convey your experiences and how surreal everyday life seems to feel right now?

CW: I think in a funny way, using the sci-fi theme was my way of dealing with what I’ve been through. A lot of people don’t really confront things head-on, so maybe using that veneer of sci-fi was my version of therapy to help process it all (laughs). Most of the songs on Science Fiction really just focus on how I’ve navigated my life being in my twenties. I’ve spent a lot of time living in London, so a few of those tunes are about getting wrecked all night and then getting the fear from it afterwards. But then there are other songs like ‘Councillor’ and ‘Funeral’ which are tunes about how you only see certain family members at either very pleasant or very horrible happenings.

You said in the album’s press release that, “Thee MVPs ditched the reverb and space echo on the vocals and traded it for better lyrics.” How do you think Thee MVPs’ songwriting has changed over the years?

CW: I think more than anything, I feel a lot more comfortable as a musician. Everything [on the record] is generally a lot faster and heavier, and the songs are now more reflective of what I’ve always loved as opposed to what I was trying to phase in and out of the music at any given time.

There’s definitely a lot more emphasis on the lyrics now too. It was very important for me to feel like I wasn’t just phoning in the lyrics for the new album. There was a really good record by rapper Quelle Chris called ‘Everything Is Fine’ which came out around the same time as I was finishing up the album’s lyrics. The whole record centres around how people need to be more comfortable reaching out to one another and telling each other that sometimes things aren’t okay. The ‘Everything Is Fine’ title references the interaction you may have with someone when they ask you, “is everything alright?” and you reply, “everything is fine”, but it actually isn’t. So I guess that type of openness really inspired me during the album’s writing process.

I see songs such as ‘US Airways’ and ‘Funeral’ included in the album’s tracklisting. Both songs have a long history with Thee MVPs and have previously been released as singles before. What made it so important for you to revisit and re-record these songs for the album?

CW: I wanted the record to accurately document who we are right now as a band. Our overall musicianship has improved, so I wanted to give those songs the same type of treatment the newer songs were getting. Also, with us still being largely unknown, it would be good for newer fans to have a chance to listen to those songs. A friend of mine said to me recently that it doesn’t matter if it’s old, if you turn it for the first time then it’s new, and I definitely took that type of mindset when it came to this record. 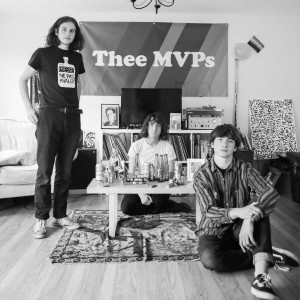 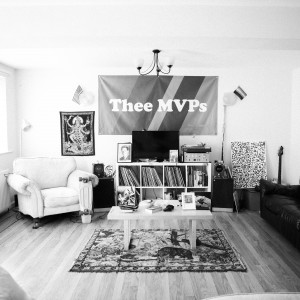 The process of completing Science Fiction inspired you to start your own record label, Eeasy Records. What were some of the experiences that encouraged you to start the label, and what would you say is the label’s ethos and mission statement?

CW: Due to some bad luck, we lost a bit of the network we were relying on to get the album touted about. When it became pretty clear that our options had shrunk, I thought I should take a crack at starting a label myself and see where it took me. I was hesitant at first, but after reflecting on everything for a bit, I thought why not just reach out to some people who I know and air some questions to see if they size it up as something I can do? The first person I contacted was Matt Jones who runs Castle Face and he was nothing but incredibly forthcoming with all kinds of information. He gave me some incredible advice and he helped me get the label’s distribution set up.

Aside from Eeasy Records facilitating the release of Science Fiction, if I’m going to turn my hand to something, I’d want it to benefit others rather than just myself. There are tonnes of bands who I like that just don’t get the chance to release a record, so I want to provide a platform that will give bands in that situation an opportunity. There’s some really good stuff happening in Leeds at the moment, and when I see people putting in as much heart and soul as I would put into something, then I want that thing they’re working on to be given the fair treatment of having it released on vinyl and being properly written about and played on the radio.

Thee MVPs are well known for their hard work ethic, and the process of getting Science Fiction to its release stage has probably stretched you further than you ever would have expected. What lessons do you think you have learned from the experience?

CW: Don’t let something as trivial as money stop you from doing what you love. It became very apparent that if I wanted to do things in time for this year, I needed to get about £4k together to pay for the first bit of pressing for the record. So I worked a job as a roady building stages, and I worked every hour that they could give me, which was basically a 60 – 70-hour working week.

I stopped drinking and I got my food bill down to about £10-15 a week, which meant that the only thing I needed to worry about was paying the rent. I managed to get the money together by mid-November last year, and basically it taught me that you just need to put the work in. I’m not saying we’re any type of success story, but if you really want it, it’s possible to go save up a bunch of money to do something you really care about – you just have to make it number one.

What do you hope that people who listen to Science Fiction will take away from the record?

CW: The main thing I want to change is people’s perception of how we sound; I just want the record to melt someone’s face off (laughs). I want the album to stand toe to toe with the records that I really love and I hope that someone will enjoy Science Fiction like how me and you enjoy our favourite records.

More importantly, I want the record to help demystify a few things about being in a band. I would hope that the album, despite how much hard work we put into making things sound decent, would make people feel that it’s possible to start doing your own thing and make your own version of what you care about, so long as you work hard. I don’t think what we’ve done is unachievable for anyone else, and I hope that the album encourages people to do stuff they love rather than just toe the line.

Science Fiction is out now via Eeasy Records.