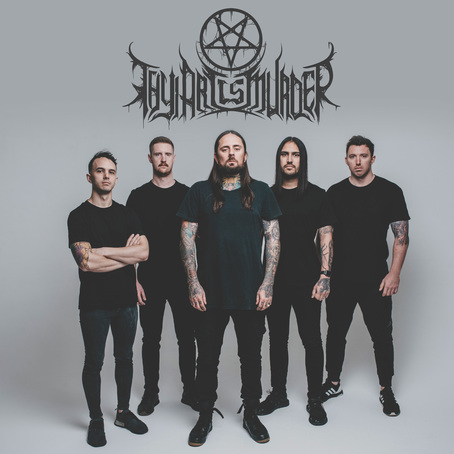 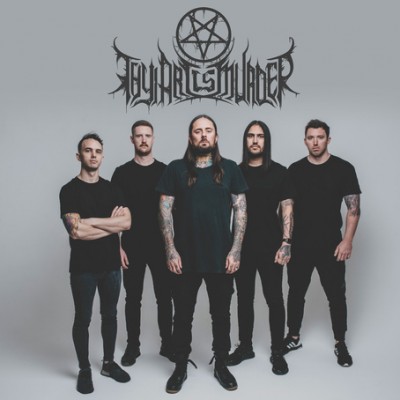 The Aussie, deathcore quintet, Thy Art is Murder are a band that have been popular in the UK for quite some time. Having previously performed a range of headlining slots, as well as festival appearances, they continue to deliver material that excites and engages fans both new and old.

On Wednesday 29th January they headlined SWX Bristol and half an hour before the doors opened, we had an opportunity to sit down and chat with vocalist, Chris “CJ” Mcmahon. After establishing that the frontman “fucking hates British weather (but enjoys Bristol!)”, we finally dove straight into talk about their latest album Human Target, opinions about social media, and the importance of giving back to their fans.

So, I’ve heard that this is your biggest tour yet and there’s some crazy production to look forward to. How’s it all going so far?

Chris “CJ” Mcmahon: It’s great! We’ve had one or two legitimate sold out shows and tonight is on the cusp of selling out. It’s great to be part of a tour that’s doing so well, and to be headlining is a very proud moment. It’s nerve wracking though because all the bands on the tour are exceptional, so the pressure is really on us to perform and show people why we are the best.

Speaking of the other bands, there are four others on the line-up for this tour which is more than usual. What’s the reason for that?

CJ: We wanted to give back to the fans. That’s why we put pretty much put all of the money that we’ll make on this tour into our production. We’ll probably walk away with little/no money but we wanted to give back to the fans and really put a fucking show on. We wanted to show people that we care about our performance and what the fans want, and we want to push our career further, so this was the right thing to do, not just for us but for the scene as well.

That’s a great approach! Your recent album Human Target certainly seems to be giving a lot to your fans.  There’s a variety of ways to interpret the record but rings as a commentary on the different issues we’re facing as a society right now. What meaning were you trying to achieve when writing it?

CJ: Each song is a little different to the rest. It’s a bit more personal than previous works where we’re speaking about issues globally. This one touches on that slightly but it’s mainly how we see the world adjusting with social media. ‘New Gods’ is based on false idols like Kim Kardashian and “Instagram Influencers”, people who have no fucking talent, no meaningful advice. It’s all just propaganda and bullshit. Then you have ‘Chemical Christ’ which is one of my favourite songs that was partially written by me and Andy, our guitarist/ manager. It’s based on my previous drug addiction and how I viewed myself, and how Andy/ others viewed me, and how I view some of my close friends who have also struggled with drugs. I feel our fans see that we’ve got a lot more personal on this record.

We love that concept ‘New Gods’ everything is digital now, what’s your views on this?

CJ: The song itself is about how people, even my wife and my friends, have their heads constantly in their phones, they’re fucking glued to it. People are turning into fucking zombies that are being told how to live, how to like, how to have a point of view. Your point of view isn’t your point of view anymore. It’s not the same view as the band, but I feel the internet has given everybody a voice, and in my opinion not everyone deserves to have that voice. There’s a lot of ignorant, stupid fucking people in this world and I don’t think their voices should be heard.

Have you had any backlash from the obvious connotations ‘Make America Hate Again’ brings, from US fans?

CJ: No, I think everybody gets the point. When we first released it I saw a few comments saying “how dare you write a song about the American way when you’re not American.” Well, our drummer is American, three of our crew guys are American, our Andy is half American, I feel that’s enough of us to be able to have a say. The decisions of the American government affect us all. They’re supposed to be “the leaders of the free world”, which they shouldn’t be, but they are. Their country is probably more fucked than most of ours, so they should probably concentrate just on cleaning up their backyard before they worry about trying to clean up other people’s- that’s why we wrote the song.

Everyone who listens to the album will have that “one” song they relate to, what’s yours?

CJ: Yeah that’s right.  I really enjoy ‘Chemical Christ’ and ‘Eternal Suffering’. When we first recorded ‘Atonement’ I was like “I don’t like this song”. Then we finished recording it and I was like, “I still don’t like this song”. Three/ four months down the line I was listening to the record on the way to work and it came on and it just really grew on me. By the time the album came out in July I was obsessed with it, so I hope we play it soon.

As well as this tour, have you got any exciting, upcoming projects?

CJ: Mainly touring the world and headlining. We’ll be back in the UK for Download Festival in June. We might have something in store that I can’t really talk about yet, but by the end of the year there be something really cool come out with information and things attached to that information.

For all future news about Thy Art Is Murder stay tuned to their socials and check out new album Human Target.