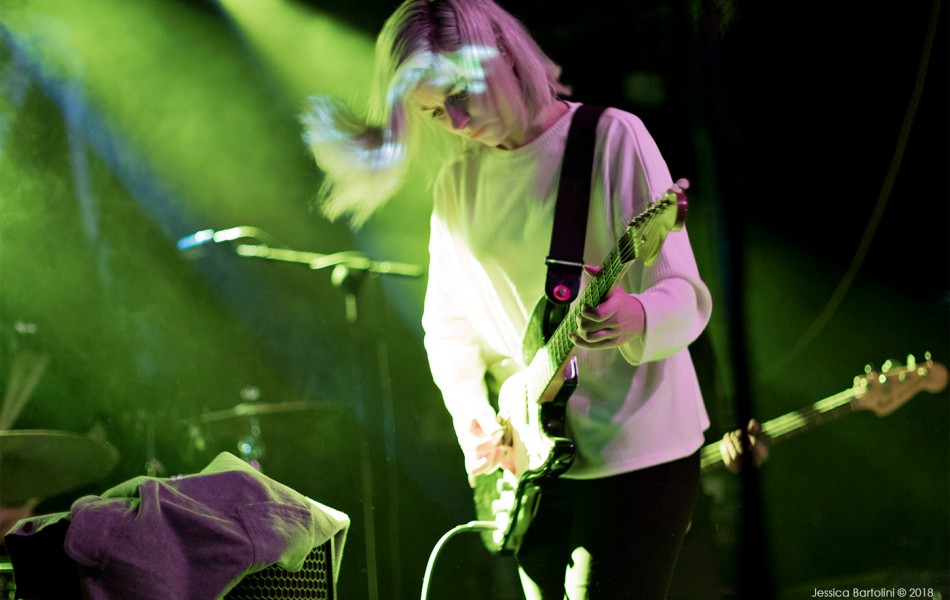 Toronto jangle-pop band Alvvays might not be a household name in the UK just yet, but their seven-year career so far has seen them build something of a cult following on both sides of the pond. Tonight’s gig sees the Canadian four-piece sell out the 600-capacity Trinity Arts Centre, which is currently shrouded in scaffolding. In fact, the building is so indiscernible as a venue from the outside that it adds an aura of symbolism to the evening – only those who know, know.

The band take to the stage at the prompt time of 9pm and waste no time kicking things off with the spritely ‘Hey’, from last year’s Antisocialites album. Aided (at least, partially) by continuous projected images, the band admit mid-set that the white backdrop they ordered arrived far too small and moth-bitten to be used for its decided purpose. Instead, the colourful images project onto a black backdrop and singer Molly Rankin’s oversized white sweatshirt, giving the stage an endearingly DIY aesthetic that the band would likely be comfortable in anyway.

The audience ranges from teenagers to middle-aged couples, basking in the blissful indie pop of ‘Atop a Cake’ and ‘In Undertow’, complete with a few atonal noise solos from guitarist Alec O’Hanley. Rankin (whose Ontarian accent charms the audience throughout) and the gang rattle through an impressive 17 song set before the end of the night, complete with a cover of Elastica’s ‘Blue’ which, in this outing, sounds as if it could have been an Alvvays original.

Of course, its 2014 anthem ‘Archie, Marry Me’ that gets the biggest response of the evening, its euphoric chorus still as life-affirming as when it first came out. Dusting off the cobwebs, Alvvays succeed in bringing this murky, Bristolian evening out of the shadows and one step closer to Spring.