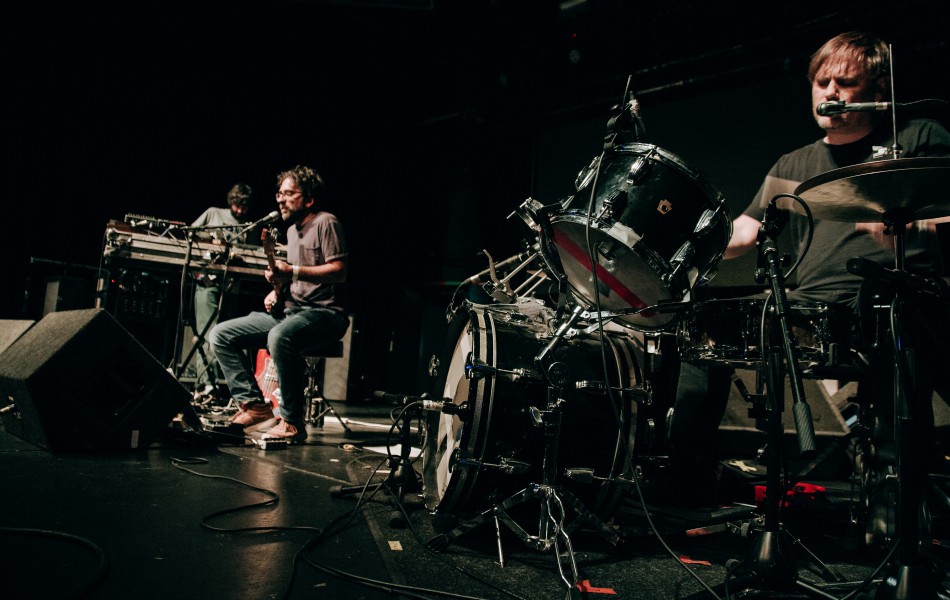 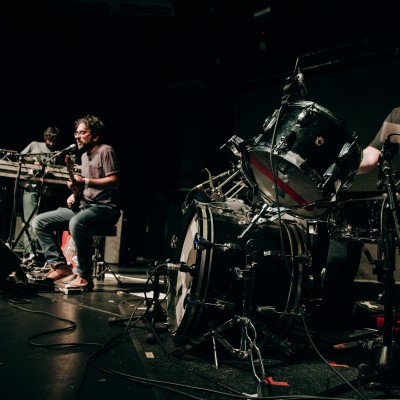 Summer finally hit our beloved city over the weekend. Revelling in the lazy, languorousness that a warm climate brings, Beak> made the perfect soundtrack. Playing at SWX on Monday, the band continued to seem surprised by how well they had filled the venue, even if most of the people there were friends and family. The trio were supported by Snapped Ankles, a post punk band taking the scene by storm in the last few years.

For those that don’t know, Snapped Ankles are a group that perform dressed as forest-dwelling, tree-like creatures and trigger synthesisers and instruments that are also disguised as trees: a visual spectacle at the very least. With heavy vocal effects, energetic drum riffs and squelchy bass they should be a high octane treat, but unfortunately Monday’s performance fell a bit flat. I look forward to seeing them again as headliners rather than in support to experience the full force of the forest.

Beak> have been around for a fair amount of time, releasing their first eponymous album in 2009. Personally, I think they are highly underrated. The current line up consists of Billy Fuller, Will Young and Geoff Barrow with names such as Portishead and Robert Plant on their CVs. They have maintained such an unmistakable sound, so familiar on tracks such as ‘Wulfstan II’ and ‘Brean Down’ which themselves span from 2012’s >> to this year’s >>>.

They came on stage with very simple lighting and high spirits, rolling into action with ‘The Brazilian’, the opening track on their latest album. I don’t know what it is, but something about their music tells me I should hate it, but I can’t help but love it: the broken drum beats, the discordant synths and the droning lyrics. Their live show was slick and accomplished, each member displaying their talents in turn. Geoff Barrow masterfully played drums and acted as spokesperson for the evening. After every track he requested alterations to the stage lighting. At one point he asked for the audience to be lit up and remarked: “It’s like being at a boiled egg convention”, adding to the running joke that they weren’t big enough to play SWX.

The evening was a true display of musical passion and skill and despite each members’ relative success, it was humbling how excited they were at having been “played on the radio”. It seems like the years of hard work are finally paying off for Beak>.