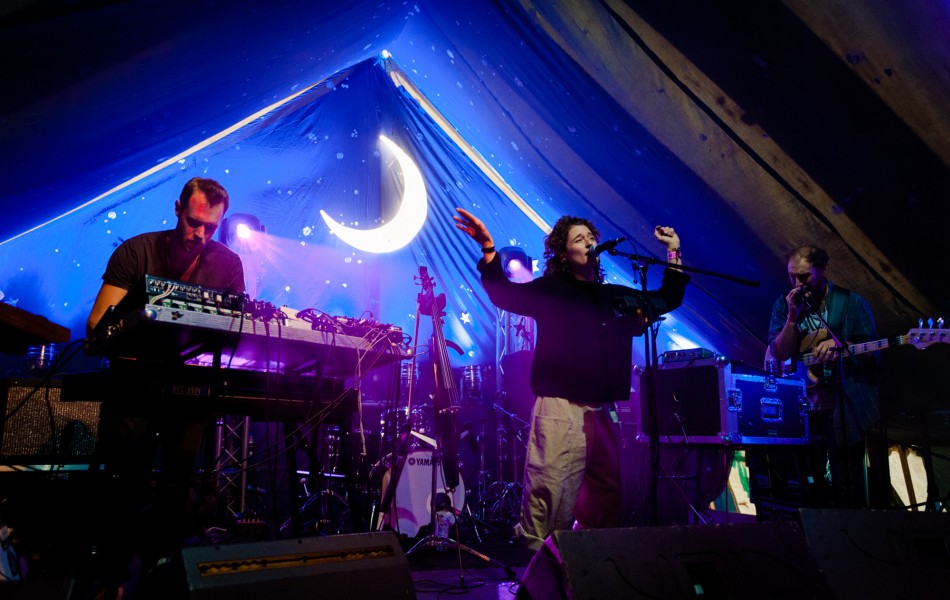 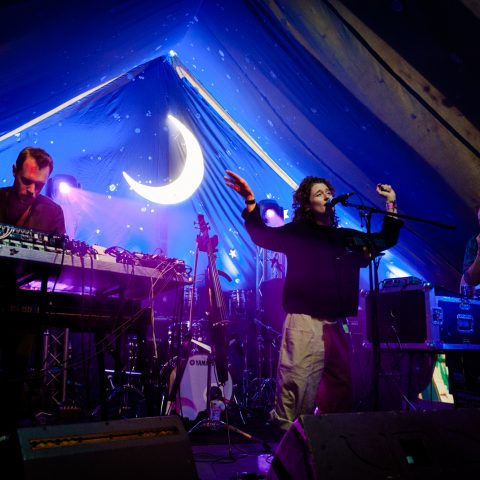 Rolling into its 12th year, Farmfest has started to attract bigger names with each passing summer. It was fair to say that the atmosphere on Gilcombe Farm this year was electric with expectation upon arrival.

We started the day at the main stage where psych-rock trio CaStLeS kicked things off with fuzzy keyboard riffs, maracas and twangy telecaster guitar. The vocals eeked of psychodelia but were a little frail sounding at times. The song structures seemed a bit clumsy at times also but there was a quaint intimacy to the music and they concocted some really interesting melodies exhibiting some the traits you’d associate with The Doors.

A short walk towards the The Big Blue tent, Port Erin were plugging in. With a night sky themed backdrop this seemed an appropriate setting for what feels like a musical moonwalk. The live performance was a step up from their recordings. The dynamics gently swooped between sections and the dystopian feeling ‘Chaos On The Streets’ was a fast paced Coldplay-sounding (in a good way) crowd pleaser and perfectly balanced anthem in the making.

Febueder came on next with a largely instrumental offering which had some very soothing grooves and intricate detail. The vocals were in a low reflective sounding timbre which got drowned a little during the more intense moments. The structures jumped about a bit in a jazz manner but tended to lose rather than intrigue us unfortunately.

Next we caught Bristol three-piece Elder Island with excited ears and they didn’t disappoint. With Swing-inspired vocals the singer was flanked by a fluttering of thin keyboard notes and a bloated bass line which drenched us in an overwhelming atmosphere straight away. The sound was saturated with reverb and delay effects as everyone swayed along in glee. The music ascended from ambiance into pure dance as the set continued. With live looping of the vocal refrains and the sugary sweet danceable grooves, this was no doubt one of the day’s top highlights.

We briefly took a trip to The Acoustic Set which was a small tent hosting a mixture of events and at this point it was the Milk Poetry event hosted by Mailika Kegode, a local Bristol poet. They received an enthusiastic gathering of people and passionately delivered a display of word craft touching on an array of subjects from the whimsically comical to the dark and confrontational realities of war.

Wandering over the The Sett, once again with its red eyed evil looking badger backdrop IDestroy were on. A carefree punk act with a Ramones-like heart while exhibiting the sharpness of 90’s acts such as Green Day. The cymbols rang out manically against the stomping bass lines with the set ending with an epic breakdown full of sweat and amp screeches. Each bite-sized tune leapt with ferocity and energy.

The main headliners of the night were Shobaleader One. From the associated press they felt like one of those bands you think you should know about already? They arrived wearing helmets covered in LED lights of differing colours and forming shapes over their faces. They began with an overwhelming barrage of chaotically timed drum parts and disjointed bass line attacks which sounded like someone had tortured the music to a 70’s car chase. It was odd that despite the sheer mass of activity flowing off the stage that people started to look a little bewildered. Each track felt like a unyielding intro to a song which never started. There were a handful of people that engaged to a seemingly transient level. Perhaps the remainder if us just didn’t get it?

We moved across to The Sett to watch The Greasy Slicks who played an extended set of striding Dead Kennedy’s flavoured punk. By this point the tent was jammed full and the optimistic feeling catharsis of the music quickly had us all focused on the relentless thrashing chords and bouncing around in enjoyment. We did wonder if some were still rather bamboozled by Shobaleader One and found basking in the straight up approach of this set was all the more refreshing.

Lastly we paid a visit to DJ Yoda in The Big Blue. Despite wanting to dance it was a little too rammed to move but he stayed true to his brilliantly disordered mixing styles. Blending Snoop Dog with the IT Crowd theme and everything in-between, he seemed unable to play more than 30 seconds of a track without his itchy DJ finger spinning another genius mismatch on top of it.

Read our review of Saturday’s instalment of Farmfest.