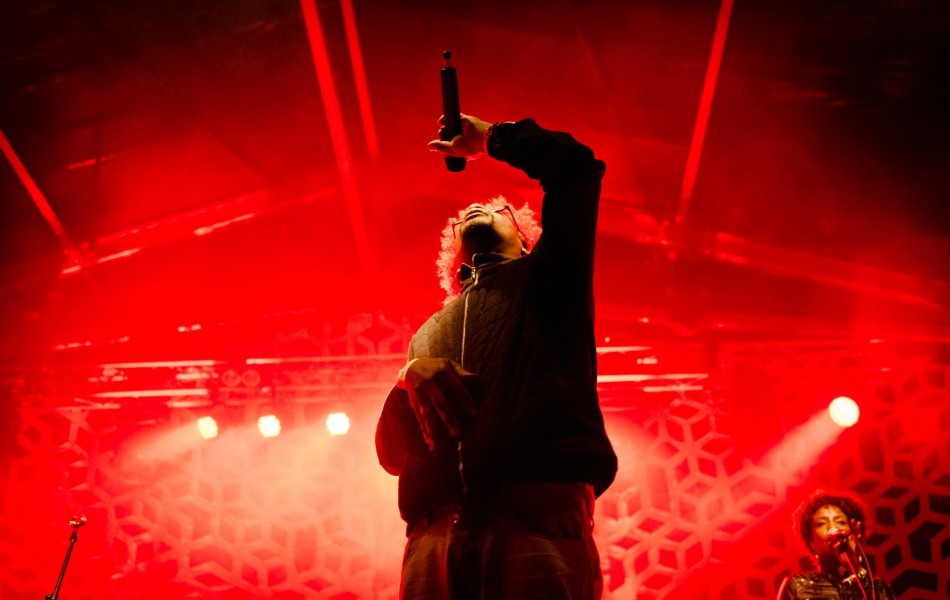 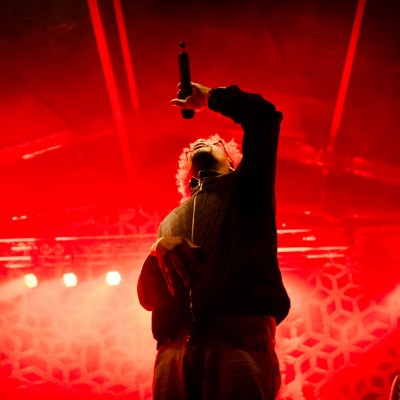 Today at Farmfest was a wellies day. The rain had made its presence known and ensured we didn’t forget as the hours went by. In The Big Blue with our morning burgers, hog roasts and coffee, we gradually found ourselves lying on the floor as Luo began. Ideal music for if you’re feeling a little tired and a touch hung over. It simmered gradually with atmospheric drum loops dropping in and out. Driving piano parts accented the soundscapes as we laid there letting it sooth our slightly frayed wits.

Matt Woosey took to the stage next with what felt like the musical backdrop to driving down a desert highway in southern USA. His contagious toe tapping bluegrass had a distinct Fleetwood Mac feel and although we found his sudden shift into a Texan twang during the songs a bit eye brow raising, it was a light and enjoyable set which sparked well with the audience.

Port Erin who had apparently had a call at 10:30am after a night of over indulgence requesting they play again on the main stage in two hours time, admirably returned with enthusiasm. The upbeat ditty ‘Just Riding My Bike Man’ was the highlight and won a certain woman, dancing with utter abandonment, a free T-shirt. She was even doing a boogie when there was no music? We then headed back to The Big Blue and were overwhelmed by what we experienced.

Dizraeli, an ex-Bristol resident still retains much admiration from the city and arrived on the stage without his DJ and with a handful of instruments. What was noticeable, despite a self-confessed excess of nerves, was his rapport with the crowd. This was instantly felt as he began with a poem about imperfection. He moved from stripped down a-capella beat poetry laced with powerful and emotionally charged indignation and verve to heartfelt guitar tapping folk. In an attempt to “help me arrive” he dropped down to the barrier to sing ‘Bomb Tesco’ which incorporates a shout back from the crowd. Once again with no instrument he charged through the track with the often silent but infectious beat grabbing hold of us all. By the end of the set there was the most tangible communal vibe we’d felt at any point of the festival and he was met in the closing moments by the only standing ovation we’ve ever seen at Farmfest. With the absolutely electric world he created in that small tent it was well deserved.

Next at the main stage, Kate Stables from This Is The Kit stood donned in a striking red and yellow vintage outfit on a distinctly crowded stage with two saxophonists and a banjo player among others. It was a big sound but not an overwhelming one. Remarking on how the weather reflected the ‘drizzly factor’ of the music, Kate’s fluttering yet sharp voice sat within a vat gentle touches from the shuffling drums, shakers and decorative backing vocals. With a slightly baroque folk character there was the occasional bubbling over of distorted guitar licks as the music often waltzed and seemed to levitate along. To call music soul-enriching is potentially pretentious but we’d say this certainly was.

Stone Cold Fiction were back at The Sett and once again showing how a band can go from 0 to 60 with ease as they ripped the gig open with ‘Em’. This psyche rock trio had a decidedly difficult crowd to win over who seemed riveted to the floor as the snarling distorted riffs and hammering bass parts rattled their heads. Before long all were standing as others shuffled and packed in behind them. We were treated to several new tracks and a third appearance from Port Erin frontman Reuben to assist playing the epic desert rock track ‘Pointless Motion’ which gained a raucous applause for its solo. We tried interviewing them after but the inflatable mic we were handed was strangely ineffective.

After yesterday’s experience at The Acoustic Set we paid it another visit and encountered a stripped down set from Meeking. This took the form of a narrative toned slightly Zeplin performance. The laid back feel was of the non-cocky variety but possessing a knowing confidence which made for a fun and entertaining experience. Following this was one of the unexpected highlights of the evening with Two Day Coma. Last time we’d watched them we felt that they were lacking a bit of confidence but seeing them in this laid back setting with the slightly Mercury Rev tainted vocals and functioning as a tight and heavily emotive unit showed how thoroughly impacting their music can be. The fragility and shards of arpeggio were coupled with the strangely effective grouping of simplistic phrases which made up the lyrics.

Last of all we all herded down to the main stage to see Roots Manuva who had turned up in a bright red Afro wig. Upon realising we were in Somerset after initially calling out to South Gloucestershire he would intermittently shout “Somerset!” throughout the set. More times than you’d imagine actually. He had arrived with a full band; decks, drummer, backing singer and Ricky Rankine who played off him in the manner of a double act. Roots was like a bundle of compressed energy as he jittered erratically bending his knees randomly, shifting left and right and obsessing over the bright lights on the Ferris wheel which were “soooo nice”. Outraged by the lack of glow sticks he remarked that he was going back in time as the mesmeric humming of ‘Movements’ drifted in. Hands raised and swayed from side-to-side with the timeless tune. Another highlight was ‘Dreamy Days’ as we were all tutored in how to correctly sing the melody and as the set drew to a close with ‘Witness (One hope)’ you could see a panorama of enthusiastically bouncing umbrellas.

As the night continued we found it increasingly more difficult to walk through the mud pies that had founded around us but still the music and dancing seemed to march on into the night with funk and soul tunes still echoing over the fields at 8am.

We worked, sang, danced and partied in the mud and rain but it was totally worth it. Another masterstroke from the team over at Farmfest, proving once again why they’re the best music festival running right now.