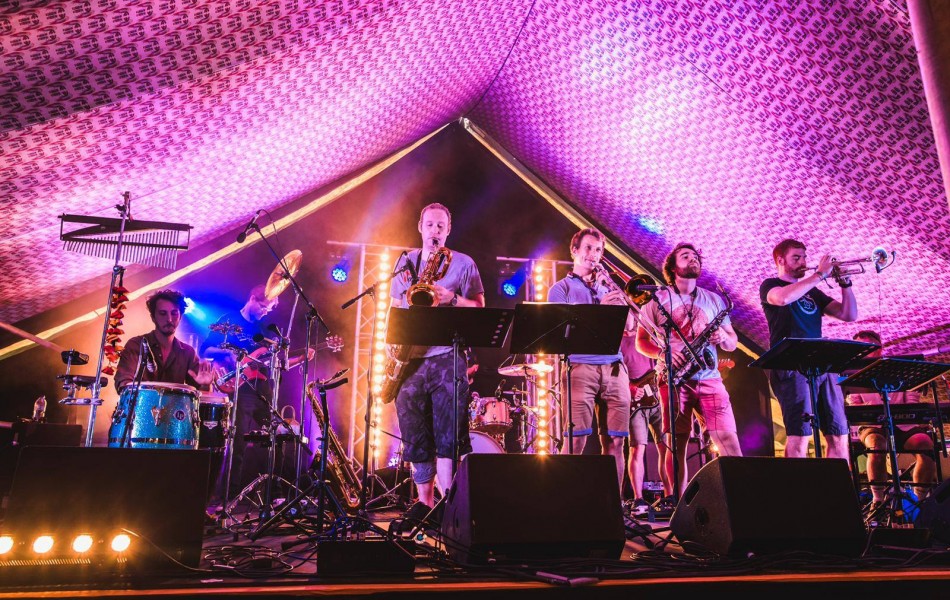 I was blasting out the sweet sounds of Scissor Sisters through the speakers of my Suzuki Swift; it was a shimmering Thursday evening and the rolling Somerset countryside provided a great backdrop for a glam rock singalong. After taking a break and a leg stretch, FarmFest was back this year for an even bigger party with heaps of Bristol names and more on the line-up. I was describing it to my friends as though I’d curated the line-up myself – I was completely spoilt for choice. There were a few bits being set up as we arrived on the Thursday, one tent was playing psytrance which I have zero interest in. Instead we headed for a vegan curry stall and watched the sun set with some beers. It wasn’t as cliche as you think, honest.

Despite the fact that two of the stages that were advertised didn’t exist, FarmFest still had a pretty diverse line-up: from jazz, funk, rock, punk, pop and an abundance of DJ’s to choose from. I tried to catch as many things as I possibly could. I crammed in 13 acts on the Friday which was a little bit like a wild goose chase. I was on the move and fulfilling my musical cravings with a tin of Carlsberg in one hand and then the arm of my very patient boyfriend in the other.

FarmFest is advertised as an ‘inclusive small-scale gathering’; it was definitely small in the respect that it was mostly sparse, with most acts on the main stage attracting a pretty small crowd and even so, most people would just sit and watch. It made for a pretty strange atmosphere and I only ever saw packed out crowds when Morcheeba headlined the main stage and when Craig Charles played to a sweaty tent. I’m all for moving and grooving but it was just a little disheartening to see bands such as Some Bodies – who totally killed their set, super-trendy-glam-twang stuff – play to just 15 people (literally), all of which were sitting down apart from myself and three other friends.

From there, we headed to Big Blue for full on jazz and funk from Wasabi. Balls to the wall grooves, the cover of Sean Paul’s ‘Get Busy’ was a crowd pleaser. Waldo’s Gift cranked things into fifth gear, using the work of Aphex Twin as a vehicle for their jazzy endeavours. They each exchanged looks and laughter at the ridiculousness that unfolded. Welsh alt-rockers Chroma gave us gutsy vocals and feminism anthems which were delivered with grit. They definitely deserved much more of a crowd but for those who managed to catch them, you knew how killer their set was.

One of my new favourite finds from the entire festival were Cykada. Straight up jazz grooves with West African influences, it was refreshing and all the members were having a ball up on stage. Hair flailing and limbs flying, their set was definitely up there with one of the best at the festival. I also managed to see some comedy along with participating in Drag Queen Bingo which was a great break from running around and trying to catch as much as I possibly could. I ended the first night watching DJ Raw Silk. I danced until the early hours of the morning and I definitely paid for this the next day, hangover included.

Saturday saw Snazzback on the main stage; again it was pretty sparse but I was front row loving it, even the sound guys were nodding and were really into their set. A dose of neo-soul is the right way to start the day. Ishmael Ensemble were technically great and played an intricate set which at times was a little samey. Seeing Cousin Kula was like Christmas and New Years rolled into one for me; an hour long set with heaps of new material which I’m itching to hear live again. ‘Invitation’ was a particular highlight with catchy riffs and calypso vocals. Ending the festival was New York based Moon Hooch who were literally insane. Two saxophones and a drummer, need I say more? Utilising a traffic cone into their set was unlike anything I’ve ever seen, it was an amalgamation of dubstep and high octane horns. It was comical and yet so polished. Definitely glad I managed to catch these guys.

Overall, FarmFest was great; the music choices on offer were second to none, however minor details such as the limited food stalls, random decor which were nothing shy of eyesores and the stages that didn’t exist. I hope next year is bolder than ever and a little more attention is given to the overall look and feel.