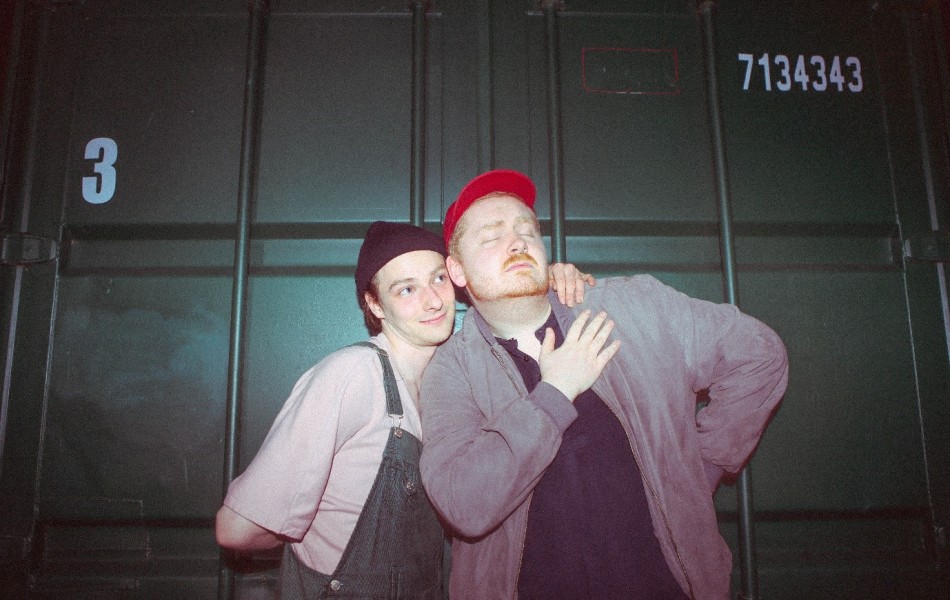 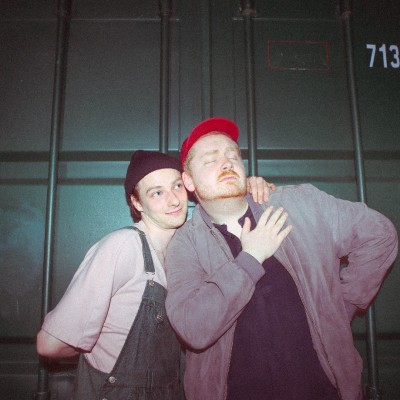 A Her’s gig is never anything short of a good boogie – glistening tunes and a Pierce Brosnan cardboard cutout. The duo known as Audun Laading and Stephen Fitzpatrick have been killing it this year, with countless festivals under their belts and topping it all off with a stunning debut album (check out our review). To celebrate the release of their jangle pop odyssey, Invitation to Her’s, they performed an intimate and humorous set at Rough Trade that was filled with lighthearted on stage banter and a few sing-a-longs too.

Audun and Stephen are greeted with a roar of applause whilst they take their places on stage; Audun to the left whilst Stephen is on the right, Pierce Brosnan is humbly hiding away at the back not wanting to draw any attention. They begin with a new number from their album, the hypnotic twang riff to ‘Mannie’s Smile’ echoes throughout the room, it’s got a 70’s sitcom vibe to it – in a good way, trust me. The song is filled with glittering riffs and a thundering bass that made my legs quake, the catchy chorus is equally as infectious as their jovial stage presence.

“This song is about being sleepy on the phone” Audun announces, the low whirring/ modem-esque start up sound is played, ‘Love on the Line (Call Now)’ has a summery driven riff and truly showcases Stephen’s diverse vocal range, from a deep baritone to almost Bee Gee style of new heights. Playfully singing the lyrics ‘buttercup call me up, Saturday night’ – trust me, it’s the best earworm – whilst Audun covers every square inch on the stage, throwing himself from one end to the other whilst hitting every note.

A deafening swirl of reverb begins, ‘Low Beam’s’ jaunty driven riff makes it impossibly difficult for anyone not to groove. Stephen’s trademark shriek colours the tune in a sickly sweet coating of bravado. The pair are lit with fluorescent pink lighting which is timed perfectly just as the hook kicks in. As the song finishes Stephen announces that he needs to tie his shoe, to which Audun replies “in the meantime, I’ll play you something”. He plays a few dispersed notes on his bass whilst reciting the story of how someone had stole a coveted Pokemon card of his in the school playground. The audience all chuckle at this anecdote, their playful onstage relationship is instantly charming, they’ve got us all in the palm of their hand.

Slow lovers anthem ‘Cool With You’ then follows with everyone in the crowd swaying back and forth to the crooning ode. A punchy solo followed by a much more groovier second half is a guaranteed hit along with a jolly improv to end the number. ‘Marcel’ was introduced with Audun choreographing the crowd, “we recommend a side step motion if you want to get in on the boogie”. The crowd (myself included) were all singing along and swaying, Her’s were the conductors of this choir and we all were performing their anthem.

A selection of tunes from their latest album along with some favourites then followed, the delightful calypso-pop-dream ‘If You Know What’s Right’ followed by the graceful ‘What Once Was’. ‘Under Wraps’ is a textmark Her’s groove – a tropical feeling riff plus a lingering and lulled bassline – that’s the basic recipe for a sweet Her’s song, don’t forget to add some lighthearted bravado.

Sadly the show comes to a close and Her’s announce that the final number is hurdy-gurdy-pop tune ‘Harvey’ which was an instant hit with the crowd. A sick lick, popping bass line and catchy chorus gets us all grooving. Audun and Stephen performed part of the song leaning against each others backs, there’s a metaphor in here somewhere about friendship I’m sure. An eruption of applause then follows with a request they play one more song, “Speed racer!” was chanted over and over as though it was a sacred mantra. Her’s listened and they delivered, what then followed is what I can only describe as an insane rendition of ‘Speed Racer’.

Her’s are in a league of their own and are quickly becoming one of my favourite bands, I cannot urge you enough to listen to their latest album or catch them on their tour in October! Expect lots of great banter and tropical tainted tunes.