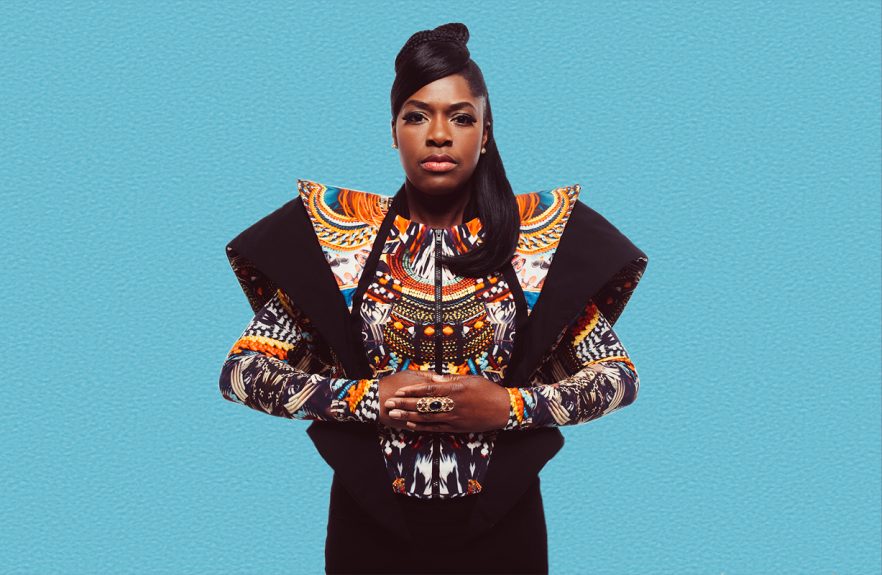 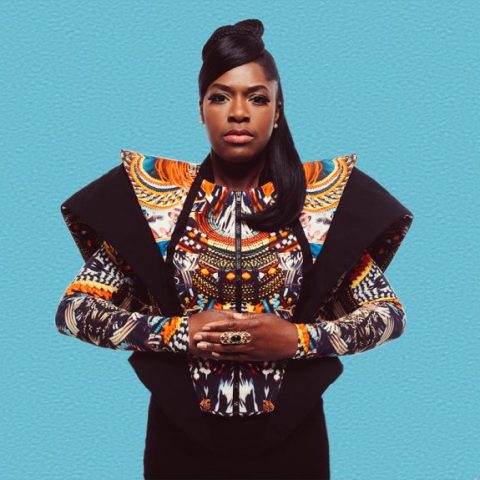 Already excited by the prospect of an invigorating night, I entered into Trinity Centre to find Aadae enriching the hollow church hall with soaring sounds of melancholy afrobeat. A duet of drums and vocals, I was struck by the diversity of resonation created by just two band members. A concoction of spiritual rap, almost operatic vocals and expressive noises resembling birds, the lead vocalist was always in full queen mode. With an echoing chorus of “I’m falling,” I dropped deep into a metaphysical world, guiding my energy into preparation for the headlining act.

After a short interval of eager awaiting, bumbling around in ample space, Ibibio Sound Machine entered the stage in darkness with oscillating 80’s sounding synths. In a moment I looked up to see a spotlight fallen onto lead vocalist Eno Williams, wearing one of her signature futuristic, kaleidoscope, gowns. Immediately, the band were in full energy, backing members bouncing to the beat, an intensity of movement they kept with great stamina throughout their set.

The opening number, ‘I Need You To Be Sweet Like Sugar (Nnge Nte Suka)’ is the first track from their soon to be released album, Doko Mien. It embodied a kick ass guitar solo by Alfred Kari Bannerman who effortlessly glided his fingers over his low strapped guitar, funky bass grooves from Derrick McIntyre and the catchiest of melodies. Eno reminded us of our blessings to be among the first listeners of their new album, soon to be released on March 22nd. And blessed we were, be sure to purchase when you can.

During the intro of the second track, Eno asked the crowd “Are you ready for an African Party?” The audience howled back, and in full swing the party proceeded. Never have I seen call and response look so cool and feel so cringe free, everyone in the crowd just wanted to be part of the gang and the humble, playfulness of the band made us feel like we were.

Throughout the set I was amazed by percussionist Anselmo Netto’s ability to cover so much ground, jumping from chimes to congas, and then to talking drum under one arm and caxixi (basket rattle) in the other hand. His solos were the kind that made your chest flutter one moment and jolt to alertness the next. Pulling you in and out of joy, apprehension and curiosity.

The spirited horns harmonised glory reggae chants, uplifting my soul with stabs and simple melodies, the perfect condiment adding a little spice to the already complex layers of Ibibio Sound Machines intense anthems. I can’t say I’ve ever seen as much movement on stage from a brass section, covering synth parts, moving to the front for some epic solos, or going over to dabble in some percussion. This gig was a steaming hot pot of intricate drumming, dub sirens, sassy backing vocalists, punchy afro funk rhythms and Eno’s tenacious vibe.

The crowd roared and sprung into fifth gear when they played well known tracks like The Talking Fish. The relentlessness of the band seemed unable to fatigue the Bristol bodies that surrounded me, red stripe tinnies flung around in the air and the city’s legend, Big Jeff, fist pumped in sync with Eno. Besides a few calm tunes, this was a high energy afro disco which spared no prisoners. Ibibio Sound Machine put on a beautifully authentic, vibrant and intoxicating show; highly recommended for those who want to dance all night.