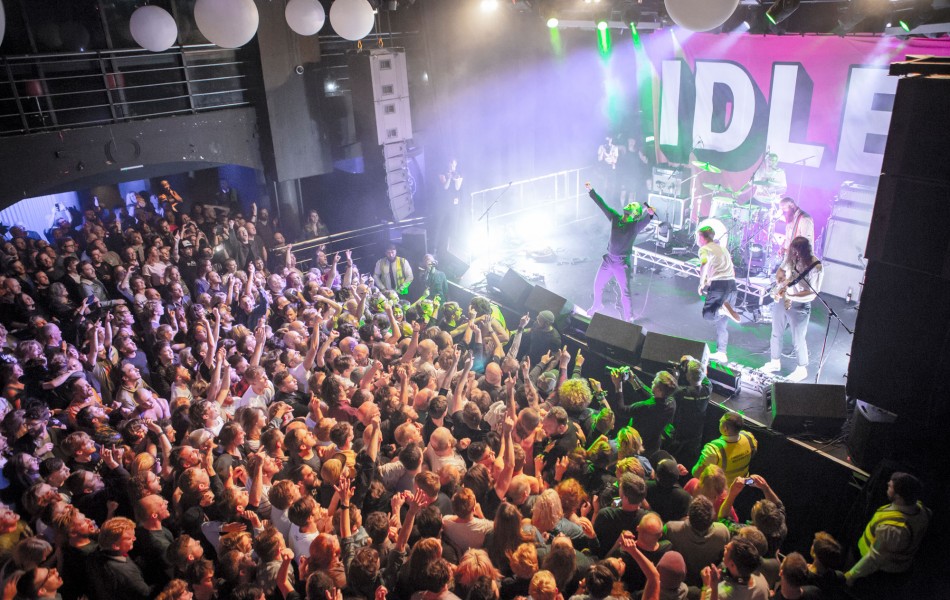 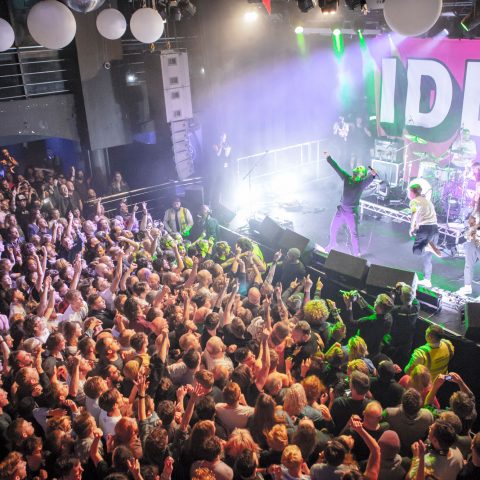 Having SWX packed full of people with their hands high in the air yelling “Never Fight With A Perm!” is not something you’d ever expect to see, but as IDLES have shown over the last two years, they’re full of surprises. Having been a regular on the Bristol live circuit for years with no little notoriety whether it be for the revolting ‘Queens’ boiled egg eating music video or packing out what was Start The Bus yet again over a bank holiday; we’ve all watched with glee as these local lads saw their debut LP Brutalism exponentially increase in popularity until it was popping up on American radio and finally getting spotted by Partisan Records who went and signed them on the strength of it.

It was no surprise then to see those long term fans scattering the venue sporting many a pride filled smirk as the gaps between them were filled by those who’ve recently discovered the band, captivated by the energy and acclaim Joy As An Act Of Resistance has been responsible for. IDLES began the set cloaked in darkness as bass player ‘Dev’ slashed at the strings to usher in the menacing opening bars of ‘Colossus’; played at a lumbering slow speed compared to usual, everyone joined in like a choir and exploding into a frenzy as they sped up and broke into the manic outro.

Singer Joe Talbot remarked that it was weird to be back but that it was also the best feeling in the world. He was largely responsible, due in part to his interjections about the messages behind the songs, for the well meaning atmosphere within the crowd. Punk gigs can often bring out the nihilist in many people creating a war of elbows and toe crushing. IDLES however seem to be becoming the De La Soul of post punk in the way the protest fuelled music cultivates a love filled unity into the organised anarchy which even overflowed into SWX’s flanking mini platforms usually reserved for those who solely nod their heads at gigs.

‘Danny Nedelko’ exemplifies the unity felt in the room as it celebrates immigrants and how they contribute to “making the country a better place” as Joe declares and insists the actual Danny Nedelko crowd surf while they play the track. He later yelled out “Elizabeth!” who is a drum and bass DJ based in Bristol getting her onto the stage along with Big Jeff who got an even bigger cheer than the band had received. Joe showered them both with praise and admiration and as the evening progressed it really felt more like ‘IDLES and friends’ as they interacted throughout what felt more like a celebration than a performance. This included the slightly bizarre excursion into a verse of Mariah Carey’s ‘All I Want for Christmas’ which has become a trend, never failing to confuse and amuse us all.

The darker nature of the music was still present as they included tracks like ‘Mother’ and ‘Divide and Conquer’ which both seemed to shred the speakers to pieces with their snarling rage and militaristic sound. They provided a euphoric catharsis and camaraderie in the room as head nodding agreement sat in place of what would usually be occupied by eye rolling cynicism when other musicians sing about similar subjects. IDLES manage to deliver all of this with conviction and authenticity and as they take a knuckle duster adorned swipe at the right-wing media with ‘Rottweiler’; everyone po-go’s with one last effort before exiting sweat drenched, ears ringing and grin beaming.