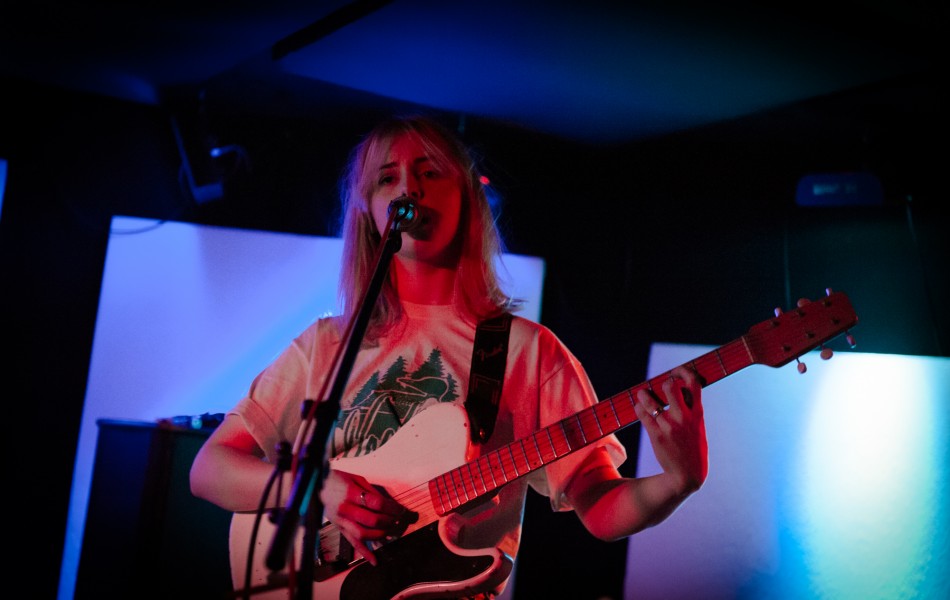 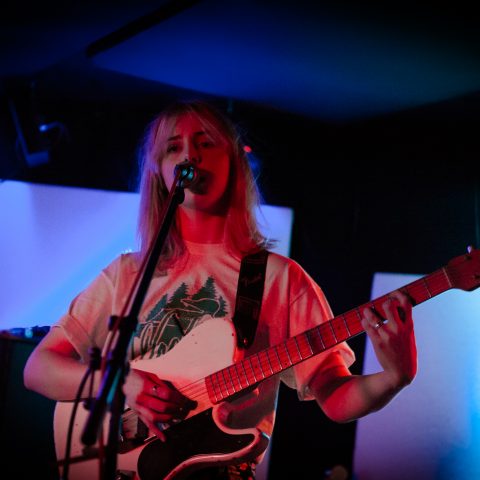 This week sees the phenomenal success of Independent Venue Week (IVW), a week long celebration throughout the UK to support the booming music scene in some of our most loved venues. Different venues across Bristol in partnership with IVW, I’m fortunate enough to join in the festivities at The Louisiana on day six of the mini festival. All three floors of the venue are flooded by local talent and up and coming acts, such as Two Day Coma, Oro Swimming Hour and headliner Fenne Lily.

The first band on the bill, Two Day Coma are playing downstairs in the cellar (The Louisiana has a cellar for live music?!). A three-piece folksy Ben Howard-meets-The Maccabees set up. The cellar produced some magical choir-esque reflections of sound, making their three-part harmonies even more eerie. Their slow lullaby bops and tender lyricism was a joy to watch; definitely check these guys out if you’re a fan of broody folk songwriters.

I go upstairs to check out who is playing next, thankfully there are timetables scattered across the venue and there were no serious clashes so I had the chance to taste all the bands that on offer. London based soul singer Only Girl filled the upstairs room with her gigantic voice and feel-good R&B vibes. Complete with a full band, Only Girl’s blend of gospel-meets-dream pop is truly magnificent and echoes that of an early Destiny’s Child track. This is their first ever visit in Bristol and it was special to witness; I’m sure they’ll be back soon for more gut-wrenching gospel melodies.

I then head back downstairs to the cellar which is laden in fairy lights and a haze of incense. A stripped back endeavour, with Oro Swimming Hour not using any amps or microphones. Their dry humour and anecdotal songs make for a lighthearted atmosphere with the audience, including myself, stifling back laughter at their mannerisms. “This is a song about paracetamol and burglary” it was declared, before performing their tune ‘Paracetamol’. They’re potentially the only band that can make a song about a robbery a funny event (they even incorporated yodelling in the set). Oro Swimming Hour are an absolute must to see if you’re a fan of Nai Harvest, Simon and Garfunkel and Alan Partridge.

The downstairs bar area had been converted into a DJ area, minus the smell of sweat and sticky dancefloor. It makes for a great environment whilst having a drink as the buzz slowly grows for Fenne Lily. After doing a series of secret shows under the names of Glenn Chilli and Flame Grilly, I was dubious as to who’s going to walk on stage tonight. Maybe it’ll be a Fenne Lily tribute band? Maybe she might play a DJ set instead? This confusion is heightened by the fact that ‘Killing In The Name’ by Rage Against The Machine is blasting from the PA system. Suffice to say it felt like I was at an alt-metal night at The Fleece or some dodgy house party in Stokes Croft (we’ve all been there).

Fenne Lily takes to the right hand side of the stage, with Maya Indelicato on drums and Joe Sherrin of SLONK on bass. Flinging her guitar over her neck whilst drinking wine from the bottle Fenne Lily is Bristol’s belle and I want her to be my bezzie mate. Beginning the night with the mesmerising ‘What’s Good’, her silky voice is stunningly pure and her calm and cool demeanour is mesmerising to watch. She playfully tells the crowd to shut up which then offers laughter, followed by silence as we are all wooed by her elegance and her wit.

Rather than leaping straight into the next song, Fenne Lily is using the stage tonight to do some stand up comedy. “I’m trying not to touch the mic cos it’s stinging my mouth and it feels like I’ve just had botox” she says before the audience laughs. The slow intro to ‘Three Oh Nine’ then begins, gradually picking up and becoming a beast of a song. Fenne’s delicate voice, lingering on the lyrics ‘please don’t leave’ and smooth guitar playing is angelic and almost becomes lullaby-like.

Then comes ‘The Hand You Deal’, a new tune which will be on her debut album coming out in April. “I wrote it when I was most sad so if you don’t feel anything then you need to have a serious chat with yourself” she says openly. This number is wholly heavenly and touching; think Laura Marling meets Joni Mitchell. The lyrics ‘although I sleep alone I don’t walk alone’ still swirling around my head, I most definitely feel something when listening to this.

Fenne then whips out the acoustic and does a few numbers for us, apologising to the crowd because she’s not been facing the front all evening saying that “if you don’t look people in the eye they don’t trust you”. Not only is she an insane performer and writer, she’s makes us laugh and is now offering dating advice, talk about value for money. ‘Brother’ is a sweet ode to her (yep you guessed it) younger brother. A charismatic and tender song which is tremendously moving and makes me wish my sister wrote loving songs about me.

Then arrives the highlight of the evening, a kazoo solo. Stay with me on this one, it’s not as naff as it sounds. The title track from Fenne’s album ‘On Hold’ is every degree of all that is good in a song – did I mention it has a kazoo solo? A song which Fenne says is “about not sleeping with an opposite sex best friend”. With the drums and bass kicking in midway through the song, Fenne’s tantalizing lyricism having me gripped, you could even say I was on hold… Fenne merely whispering some of the words in an ASMR manner was spine tingling. The kazoo, however steals the show, forget everything I said up until this point. The audience are whooping and cheering as if it was a pantomime, the kazoo brought the house down.

Sadly the gig comes to a close, however Fenne’s chances of being a stand up comedian are just beginning. ‘For A While’ is an epic number, with the right amount of echo, reverb and pulling-at-the-heartstrings-lyrics; Fenne knows how to give a crowd some serious goosebumps. Naturally everyone wanted to hear her most well known song ‘Top To Toe’ which also happens to be the first song she ever wrote. “I wrote it in my parents apple orchard, I’m very middle class” she says in a mocking manner before diving into the final number of the night. It feels like she’s taken us on a date, makes us laugh, tells plenty of first date material anecdotes and even serenades us (this is fifth date material at least).

Fenne Lily is a prime example of Bristol’s booming music scene and she is storming ahead with her beautiful lyricism and delicate tunes. Her debut album On Hold will be released on 6th April, pre-order her album here.