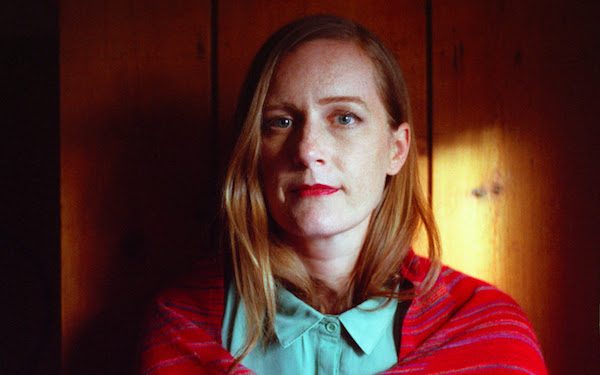 A veteran of the Oregon folk scene, singer-songwriter Laura Gibson packs a few hundred fans into the cramped confines of The Louisiana for an evening of intimate acoustic songs. Having released the fantastic Goners late last year, Gibson is armed with six albums of material and greeted by an attentive and appreciative crowd.

Support comes from the wonderful Nadine Khouri, who pairs her arresting vocal with twinkling arpeggiated electric guitar. Utilising vocal effects and a loop station, the Lebanese-born singer entwines a range of influences in a commanding half-hour set that’s met with warm applause.

Squeezing her way through the busy room onto the stage, Laura Gibson pairs a uniquely reedy voice with deft classical fingerpicking underpinning her haunting folk songs. Stripped of the plaintive clarinets and sombre cello that adorn the latest record, the songwriting stands the test of the solo setting, a rapt audience giving each song an ovation. ‘Empire Builder’ is the most evocative, wrapping the decision to move him into a 3-day account of a cross-country train ride.

Grappling with the trials of life and death through metaphors of wolves, locomotives and sharpened knives, Gibson is an accomplished performer, adapting a few songs to fit the tiny keyboard that she managed to fit into her suitcase. Gibson is in storytelling mood, chatting about previous visits and introducing songs with lengthy anecdotes that show off her wicked sense of humour.

The highlight comes towards the end of the night as Gibson conducts the crowd in providing a choral backing for an acapella number that sees her put down her guitar and stand atop a monitor. It’s a communal moment that conjures a visceral atmosphere and speaks to the traditions of folk singing. Smiling the whole way through her confident set, Gibson is more than welcome in Bristol at any time.