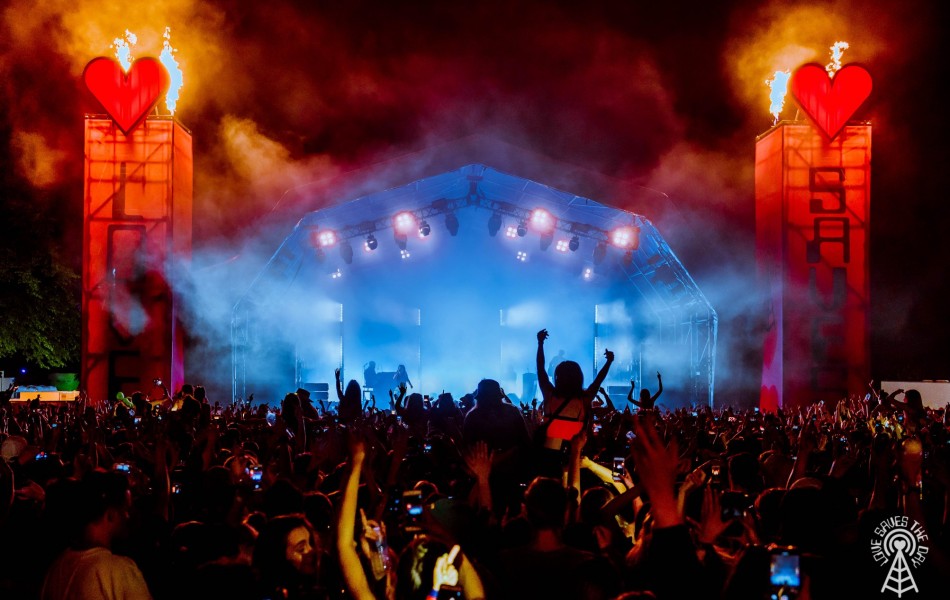 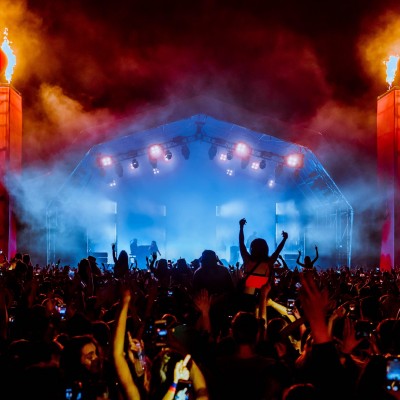 Excitement bounced through the young student crowd as we trekked the outskirts of the Love Saves The Day (LSTD) site, bottles of cider and wine being passed around in an alcohol topping up frenzy. Hundreds of neon fishnet limbs squished against each other in tangled races to enter from either side of the gate. I imagine several faces of glitter were smeared onto the shoulders of the oblivious people in front.

Luckily we had a smooth glide into the festival and headed to the guest area for a little calm in preparation for what promised to be a pretty full on weekend. It was here that I discovered some boogie inducing Bristol based DJs including Synthiiiia. LSTD had a bag load of epic female DJs programmed including Ngaio and Dutchie.

Shy FX was the big deal for many that afternoon, a huge mass swarmed down to catch him pump out his crowd pleasers, old and new. With the sun beaming down on us, the electrifying show was a perfect summer moment but with the sound frustratingly quiet at the Main Stage we didn’t stick around for the duration. He was briefly joined by Lily Allen for her featuring track ‘Roll The Dice’, supposedly opting for vocal rest before her set later that night, she jumped around a little then soon vanished. She did however smash out some surprisingly smooth vocals that evening and had the entire audience singing along nostalgically to Smile and LDN. At one point she moaned, “This is a new one from my new criminally underrated and undersold album…My manager’s looking at me like ‘Lily you dick head!’” Her reputably feisty and candid approach to life was ever refreshing amongst the glitz and glam.

My Saturday highlight has to be Kojey Radical. It was an oddly small crowd at Paradiso for him but that didn’t deter him from producing a consistently high energy performance, riling up the crowd and triggering mosh pits. A thrilling combination of hip hop, grime and r&b. The Centre Stage had great surround sound; tall imposing speakers circling the crowd like Stonehenge. This lent itself to a quick, energy absorbing skank to Noisia hosted by Master X before we headed home.

A not so warm welcome on Sunday as well as the grey weather but disco tunes and fantastically ornate drag queens strutting on stage at Shambarber soon cheered me up. It was Addison Groove at Lost Gardens where I realised the dance crew had been killing it all weekend across many of the stages, continuously throwing shapes and smiles to the crowd.

Our sanctuary for Sunday was the Brouhaha stage, it felt like an entire world away from LSTD with space to move and even sit down on chip free grass. It was here we caught appropriately sound system heavy sets from Hold Tight Records Showcase featuring Readers and Tom Spirals, Vibronics, Gardena & Kreed and Children of Zeus.

Ocean Wisdom’s fast flow shocked me by being just as good if not better live than on his records, he was also joined by MC Sleazy F Baby, another talented discovery. My expectations were exceeded here but the same can’t be said for Lady Leshurr, who broke my heart by cutting all my favourite tunes to just a verse and chorus if that – long live Juice and Black Madonna.

There were typical festival sightings throughout the two days; paramedics remedying over indulgent passed out folks, a few performers here and there dressed as old people and priests in an attempt to be funny and a splattering of perspex flowers to beautify the fencing. Brouhaha stood in its sapphire blue glory and created a calmer, loving, carnival vibe, a separate cosmos to the main theatrics up the hill.