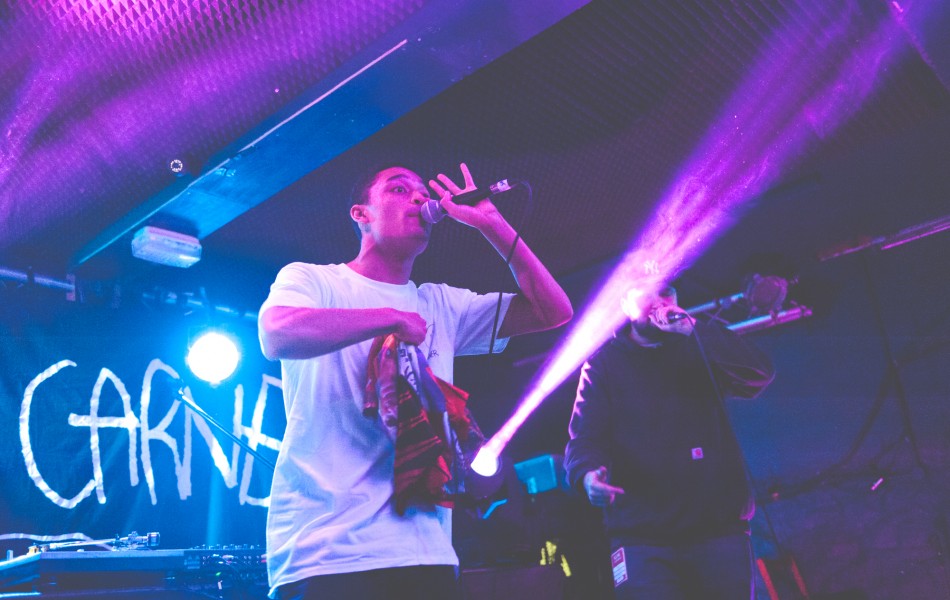 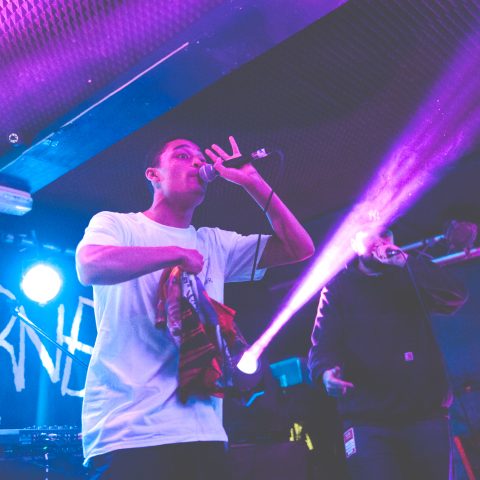 Over a year ago I listened to Loyle Carner (Benjamin Coyle Larner) for the first time. He’d recorded a track with spoken word artist Kate Tempest in under 24 hours for record label Speedy Wunderground. It was called ‘Guts‘ and had the grime, industrial London sound and lyrical authenticity that made British hip hop so unique. I was intrigued, so I delved a little deeper.

A couple of months later, Larner released his debut EP, A Little Late to rave reviews. But it was perhaps his tour of UK festivals last summer and his latest material that have catapulted him into the limelight – and onto so many ones to watch 2016 lists.

Seeing him live tonight, it was no surprise that his shows are gaining popularity. Loyle Carner is a performer – not just in the sense of showmanship, but in the sense of totally laying everything bare.

Nothing was more honest than the track he opened with, ‘BFG’.  In his boldly emotive voice, he rapped “there’s nothing left/stress pressing in my chest… Everybody says I’m fucking sad/of course I’m fucking sad, I miss my fucking dad”. The room sang along with him but probably only a handful could relate to the emotion in the lyrics.

Every song came with a story. The first was of the relationship he had with his dad. The father he spoke of positively in his music is actually his stepdad, and he made it clear that his real dad – who left when he was two – wouldn’t be welcomed at his shows. Loyle Carner isn’t afraid of getting personal on stage, but that only makes his performances more compelling.

He paid homage to his stepdad a few times during the night, starting with ‘Mufasa’ – “everything is gonna be alright/you and your mother you’re with me alright.”

Tracks from A Little Late like ‘October’ and ‘Sea Shells’ had the crowd rapping every word, while his tribute to J Dila (Dila Day) and interpretation of Kanye’s ‘Heard ‘Em Say’, reimagined for his mum, reverberated round the venue with palpable sincerity.

He apologised for his inter-song rambling, but it was clear that it was only making the audience more endeared to him. He talked about his writing and his siblings; he even performed ‘Florence’ (a song written about the little sister he never had) as a poem. At first he called it ‘acapella’ but admitted, “fuck it, it’s a poem.” Afterwards he glowed as he told us his mum was adopting a girl, and that he would be getting the little sister he’d always wanted. My friend almost stormed the stage to give the guy a bear hug.

It was clear that family is everything to Coyle Larner. From mentions of taking care of his mum to talk of his little brother and the moving tribute to his stepdad at the close of the show.

For the whole performance he’d had something draped over his shoulder that I couldn’t make out. As he took it off from his shoulder, it became clear it was a football shirt. It was his stepdads Cantona shirt. He wore it and got the whole crowd chanting “ooh aah” and broke into “Cantona”.

On the rare occasion, you go to a gig and feel like there are no barriers between crowd and stage; this was one of them. No pretensions, no superiority, just a honesty and genuine connection.