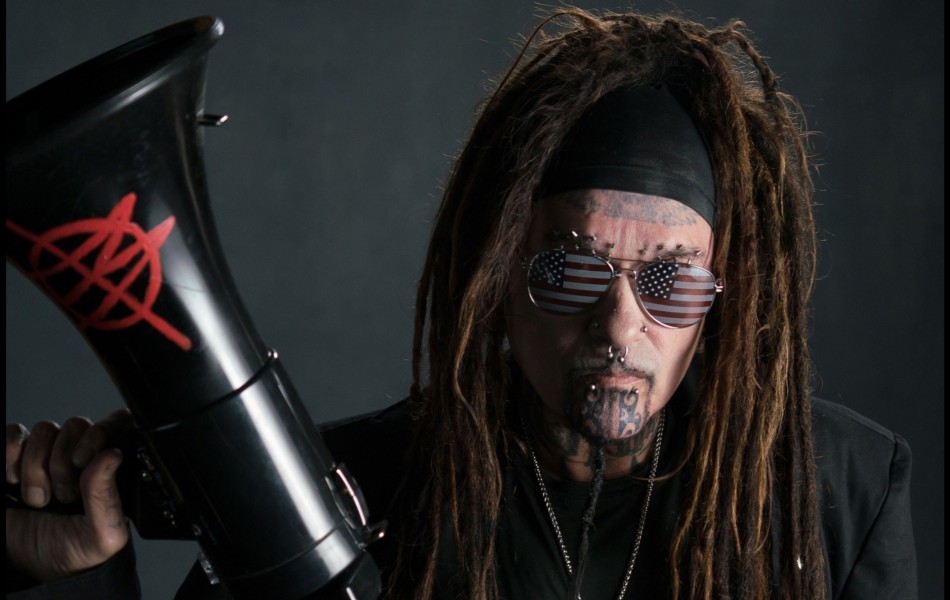 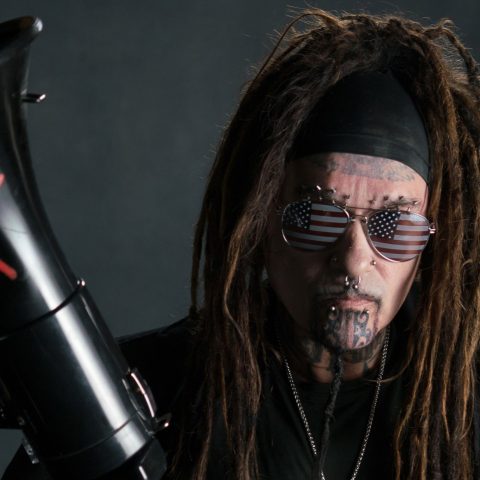 Supposedly, Al Jourgensen (founder and creative mastermind of industrial juggernaut Ministry) produces his fiercest work under a Republican administration. Though not strictly true, the late 90s sludgy introspection of Filth Pig and Dark Side of the Spoon underrated career highlights, the right-wing ascendancy and fervent authoritarian zeal of Trump’s America has provided the fertile fuel for his corrosive metal assault on Bristol’s SWX.

With the venue floor slowly filling with a surprising mix of demographics, dad’s sporting their old Twitch shirts amid muso punks and excited goth teens, the black horde gravitated toward the front with curiosity for the support act Fuck Authority, a last minute replacement for orginally scheduled 3Teeth. Armed with a cello, theremin and clown wig, Kuro’s Gareth Turner set the mood with bowel churning hellscapes, his reed omitting razor reverberations cutting through the electronic slew which thrillingly swamped the air.
The dread of Fuck Authority stirred the audience into a frenzy for the sledgehammer to come. When the lights dimmed and the backing screen flickered with activity, the garbled and warped utterings of president Trump’s many ramblings oozed out of the speakers, static ridden footage of the American TV landscape fuzzed and jumped behind the emerging silhouettes of each member arriving on stage, before a resounding cheer when the signature dreadlocks took stage.

After introductory tape opener ‘I Know Words’, the remaining tracks from last years AmeriKKKant were torched through in its entirety, starting with eight minute opus ‘Twilight Zone’ a chugging inferno of backwaters harmonica and media saturation, the arrival of Ministry and the targets of their satire and condemnation made violently clear. A return to their recent speed metal offerings reared its head on the brutal ‘We’re Tired of It’, resulting in many a plastic glass thrown in the air in the whirlpool of metal heads storming the mosh pit, before the doom of ‘Wargasm’ is secreted onto the assemblage, a sordid examination of the sexual thrill and hawkish hard-ons from those that pursue endless war, as illustrated by Jourgensen’s frequent mimicry of masturbation atop audio of the ‘mother of all bombs’. The aggro-pummel finally grinds to a halt on the grinding ‘AmeriKKKa’, a trashy glance at the smoking crater that awaits us all, strung out guitars and a superb showcasing of Sin Qurin’s impressive solo skills.

“You ready for doggy-treats” smirks Jourgensen after a brief respite, jumping into a selection of classics and fan favourites from their late 80s/early 90s heyday. ‘Stigmata’, ‘Just One Fix’, and ‘N.W.O.’ all tear the place apart, and the extra special treat of ‘Jesus Built My Hotrod’, a rarely performed cut off their apocalyptic ‘92 classic Psalm 69, a live debut for Bristol!

Ending the night on the Wax Trax! ‘No Devotion’ from electro side project Revolting Cocks, Ministry proved that the fire that fuels them still burns unabated, despite celebrating their 40th anniversary next year. Playing AmeriKKKant as a whole was neither a tedious indulgence for the band nor an endurance test for the audience, but a bold, white hot flame which sat nicely next to the hits of the latter part of their set. Trends come and go, the metal climate takes new and intriguing avenues, but Uncle Al still stands at it’s centre with a god-given permanence, his finger still squeezing the trigger of the industrious flamethrower.