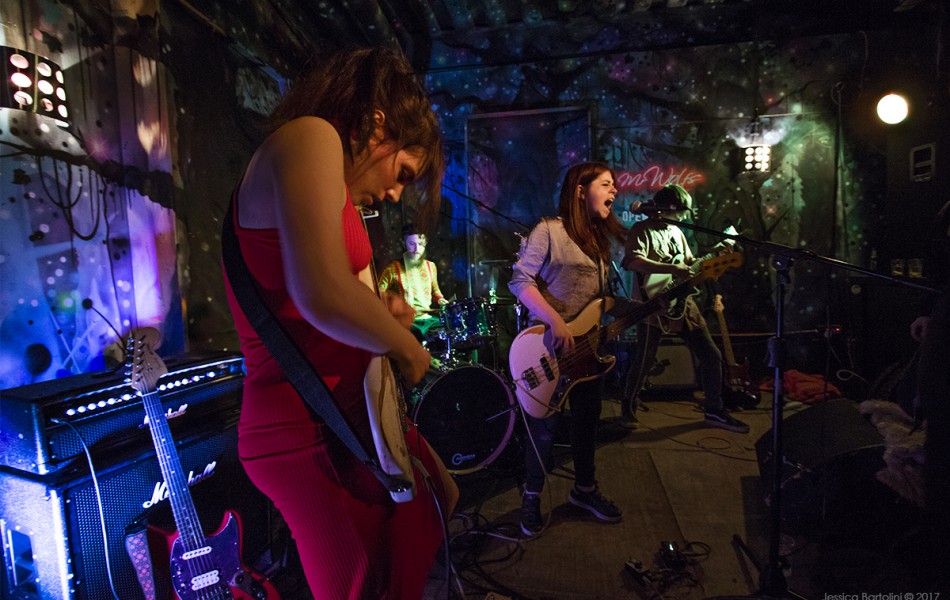 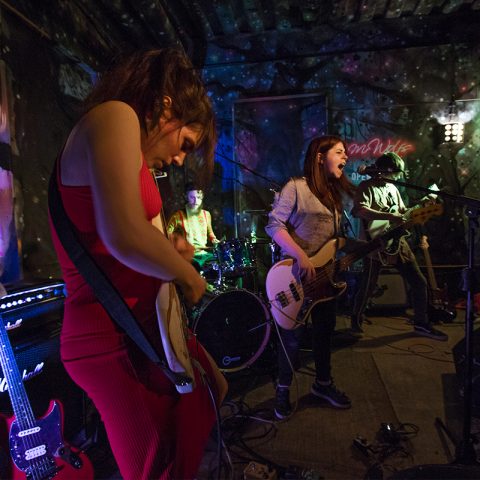 As you pass through the bar to the backroom in Mr Wolf’s you slip into an array of wooden floors and surfaces; a spraying of graffiti, sprinkled with fuzzy white dots strewn across the area and as the floor creaks you look at the diagonal stage squished into the corner and think “is this is what the backroom of a venue is supposed to look like?”

The music tonight is of an equally shameless grubby nature. With all things turned up too high from overdriven guitars to uncomfortably humming bass amps it is the perfect setup for two equally vicious acts. Three-piece Dead Royalties have a straight up punk rock sound with no allusions of sophistication as they anarchically hammer out track after track with their amps coughing up an almost digital flatulence.

They reminded me in many ways of Austin, Texas band Dicks in the way they hark band to an early punk demeanour of defiance and rebelliousness; but with the sound fattened out from the spindly shards into a large boisterous distorted stampede as it edges more closely to hardcore. It had a highly captivating catharsis at the core which everyone was whipped up into. Even though the cover of ‘Territorial Pissings’ didn’t quite achieve the scream of the original vocal, it was tremendous rendition and showed how they teetered very much on the border of grunge which set us up nicely for the headliner.

After my first experience seeing No Violet last year, I had high expectations and since hearing the new single ‘Petty Child’ I was all the more eager to lend my ears. They’re very much, amongst other things, a collection of what is good about early grunge music. They pull off the stark dynamics you’d associate with the likes of the Pixies or some of The Breeders songs with tremendous style and skill. Many of the tracks were like a mixture of bare bones and full on walls of sound as they stripped down to incidental drum parts which altered pace and rhythm at unexpected turns to isolated bass plucks and yelps from the lead guitar.

Despite spending large segments of most tracks breaking down into their constituent parts the music kept its drive. The lulls were often occupied by psychedelic feeling guitar you could liken to quieter moments of Soundgarden as the rest of the band slowly jiggered into place for another crescendo into one of their contagious groove laden choruses.

The song ‘Petty Child’ made an appearance as they neared the end of the set and it was a good example of Ellie’s unique vocal sound. Full of emotional conviction and power, she threw in staggering falsettos and her trademark juddering vibrato. The chord ascension in the pre-chorus sounded a little like Green Day’s ‘Brain Stew’ but at a much quicker pace. It’ll be good to hear some of the tracks get recorded as the set was full of equally impressive efforts. The evening had been pitched as a celebration of their hard work up to that point and that vibe was tangibly felt.