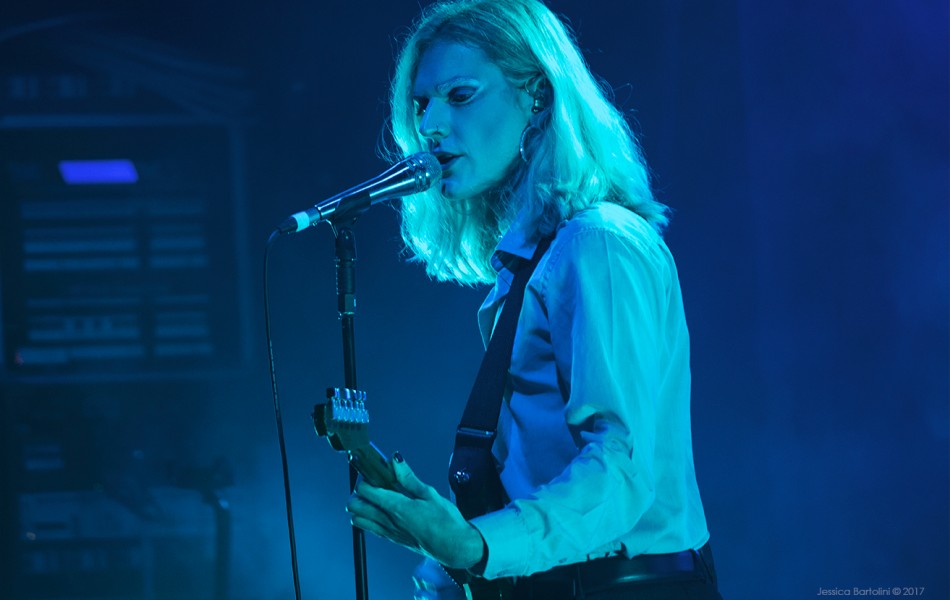 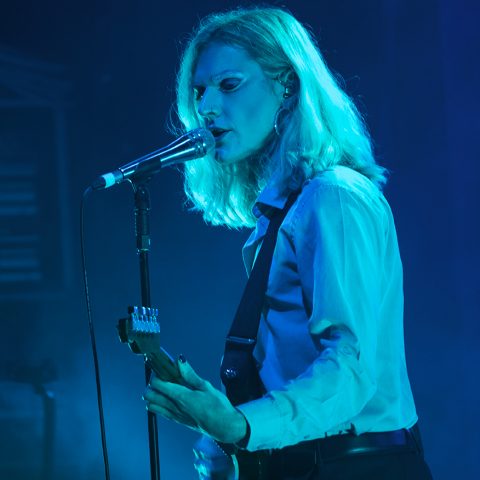 In a packed O2 Academy this evening, Reading’s Sundara Karma return to the venue that they have already played twice in this year, supporting Two Door Cinema Club & headlining Dot to Dot Festival in May.

As the band appear on stage through a haze of dry ice they strangely enter to a relaxing sound of soothing seashore waves. This was the calm before storm as Sundara Karma face an eagerly anticipating crowd waiting to hear their debut album Youth Is Only Ever Fun In Retrospect. The band start with their album finishing track ‘Another Word For Beautiful’ which is a slow and downbeat song compared to the rest of the album but sounds emphatic in a relatively small venue like this one. Frontman Oscar Pollock’s influence has shades of David Bowie/Ziggy Stardust as he’s wears blue eye shadow with his long blonde hair draped down. His low warbling voice on this song is very reminiscent of the late singer.

As the song fades out, the band mean business & kick into playing ‘A Young Understanding’ and ‘Loveblood’ which sends a couple of half full pint cups in the air in jubilation and gets the crowd moshing and dancing in the pit. These songs showcase what makes them such an exciting band to see live.
They then bring the tempo down again with tracks ‘Run Away’ and ‘Be Nobody’ but to much delight pick up the pace with punchy guitar driven track ‘Flame’. Oscar decides to take a dip into the audience for a spot of crowdsurfing and sings ‘Hold My Flame’ and ‘Set A light’. It feels like Sundara Karma are on the verge of setting the Academy alight with their performance! They have the crowd hanging on every word.

One of my favourite tracks on the album, ‘Olympia’ sounds even better live. The lead guitar part played by Ally Baty has an 80’s feel to it like something you might hear on one of The Smiths or Tears For Fears albums. The band display some beautiful and at times haunting harmonies on the song, ‘Lakhey’. The band then tear into indie anthem ‘She Said’ which gets the best reaction of the night. I did think that this song would have been best played in the encore.

As the band finish their set with songs with ‘Deep Relief’ and ‘The Night’, the band depart the stage to rapturous cheers and applause but strangely their isn’t a chant for ‘we want more’ which left me a little bemused.

The band do get a loud cheer as they head back on stage for their encore, which starts with beautiful three part harmonies and acoustic guitar sounds on ‘Happy Family’. As the song fades with the reverb from the guitar, Oscar announces his heartfelt thanks to the audience, especially for the fans that have seen them play the same songs for a while. The final song of their set is ‘Explore’ which gets the crowd dancing for the final time.

I think Sundara Karma are going grace much bigger venues than the Academy venues in UK and looking forward to seeing what they have in store for their second album.