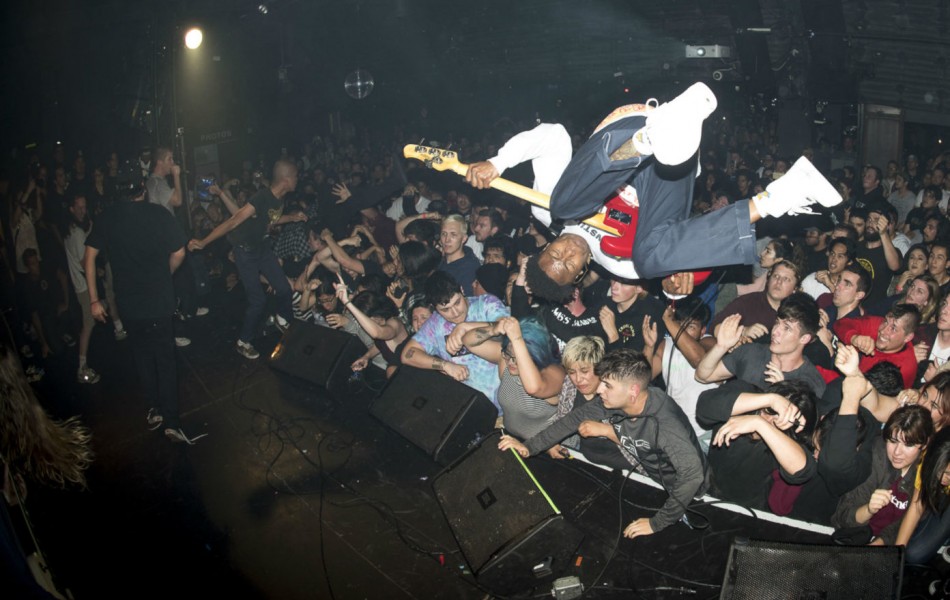 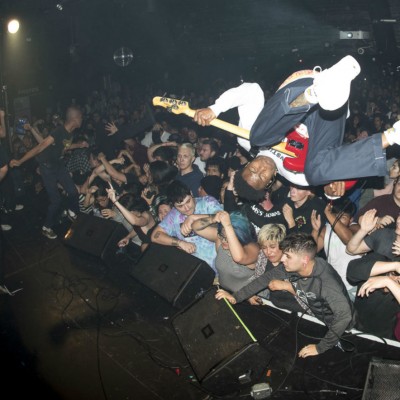 If you were to walk past Trinity Centre at around 11pm on Tuesday you would have witnessed a hoard of sweaty, vans wearing, hardcore kids all in shock from what they had just seen. However, if you were one of the lucky few to be inside about an hour and a half before, you would have experienced the mayhem instigated by none other than Turnstile.

The ear destroying sound system and open space dance floor of Trinity coupled with the stacked line up, created an appealing cocktail of chaos for all the punks in Bristol and its surrounding areas. The hungry crowd erupted into turmoil the moment headliner, Turnstile, took to the stage; the next hour saw mosh pit after mosh pit that engulfed the entire crowd and a constant flow of stage divers that could give Tom Daley a run for his money.

Before Turnstile took to the stage, the crowd were treated to the sounds of Glitterer, One Step Closer and Gag. All of which giving their own take on the hardcore sound. Glitterer felt like a bit of a curveball support, with no band to support him and some clear influence from genres like trap by replacing the live drums for 808’s. Unfortunately, the crowd appeared to be waiting for something a bit heavier, but that did not take away from his own punk attitude. He clearly did not care who was into it as long as he was, ending his set simply saying ‘thank you’ with an explicitly sarky tone.

As for One Step Closer and Gag, they scratched the itch for mosh pits that the crowd had been waiting for and warmed the room up for Turnstile. Their brands of hardcore were high octane and full of rage. Gag’s frontman was a natural born showman, taking to the stage like a duck to water and stomping about it as if he owned it. One Step Closer were keen to keep the straight edge scene alive in punk and proved that you don’t need to be off your face to play rowdy sets.

However, if we’re talking about rowdy sets, Turnstile blew everyone out of the water. Their insane charisma and stage presence was clear from the very beginning, commanding the stage and crowd. The lack of a barrier kept true to the hardcore tradition of absolute madness at the front of the room, arms, legs and bodies were flying everywhere very much to the amusement of the band on stage.

The true spirit of hardcore was alive at Trinity, heavy riffs, angry teens and utter chaos that left very little to be desired for fans of the genre. With Turnstile playing at the very top of their game this was one that will be remembered for a long while.