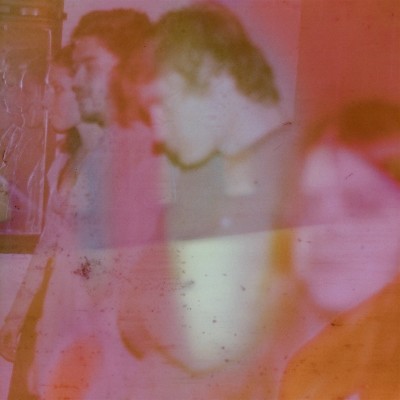 Bristol-based Leisure Records are quickly making a name for themselves as the city’s most promising independent label, having provided a platform for talented young acts such as Tropic, Harvey Cuason, Leeches and The Death of Pop in their short lifespan so far. Though the label have no intention of typecasting themselves with certain sound or aesthetic, a smorgasbord of off-kilter pop/rock with a DIY approach is one unifying style across recent signings. Therefore, it seems as if the latest addition to their impressive roster is a bit of a no-brainer, in the scuzzy, haunting grunge of Bristol’s own No Violet.

Faces is the four piece’s debut EP, and right off the bat it’s a gloomy affair. Opener ‘Be My Friend’ recalls the midnight macabre of The Wytches’ broodier numbers, right down to the sweeping tremolo chords. Starting ominously, the track builds in intensity, with vocalist Ellie Godwin constantly upping the ante throughout with her impressive range, jumping from low croons to high-pitch shrieks with purposefully jarring effect. Halfway through, the rhythm section of Kerry Funnell and Pete Catada switch the song up into something groovier, sexier, before introducing a big riff that would no doubt open up circle pits live, but is unfortunately buried in a muddy mix that does little to put any force behind it.

‘America’ follows, with weird math rock riffs and sludgy half-time passages battling it out to define the track. It’s an interesting mesh of genres, but the song sounds more natural and cohesive with repeated listens. Godwin’s voice, although distinctive, relies too often on the over-pronunciation, of certain words and recurring vocal vibrato flutters. Luckily, the band have a secret weapon in guitarist Rhys Graham, whose counter-melodies and tones remain on-point throughout.

‘Behaviour’ boasts more of a psychedelic influence, rounding off with added stoner riffs. Dynamically driven, the song builds, dies down, and then erupts louder again several times, before driving full-speed into a screeching cosmic outro. Things then take another left-turn on closer ‘She Goes Her Own Way’, which sees Godwin warbling like The Dead Weather’s Alison Mosshart over a calmer – but crucially no less menacing – backing.

Short but sweet, Faces is a good introduction to the eerie world of No Violet, one that leaves us excited to hear what other surprising avenues they explore next.

Faces EP is out on 14th September via Leisure Records with the release launch show on 22nd September at The Crofter’s Rights.